God is No Delusion

God is No Delusion 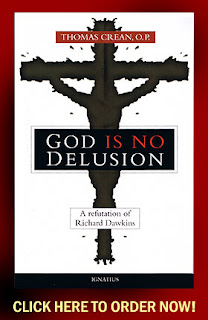 There have been various books published to counter Richard Dawkins’ juvenile book The God Delusion. I can’t admit to having read the others, but this one is an absolute must-read. Fr  Thomas Crean O.P. is an English Dominican based in Cambridge, and he responds to Dawkins with a wonderful mixture of erudition, sharp argument, subtle wit and patient charity. All this is combined with the best sort of wry, English understatement and bemused condescension. Having lived in the damp land for twenty five years and got to know this wonderful race, I could just hear the intellectual repartee and see the amusement and concern sparkling across Fr. Crean’s face.

Behind the actual debate is the long rivalry between Cambridge and Oxford Universities. Here is a theological and philosophical version of the famous University boat race–with Fr Crean the physically fit and effortless rower while poor old Dawkins is seen to be huffing and puffing to pull the oars to keep up. Eventually Dawkins’ boat sinks and the bedraggled don surfaces and stomps from the river to console himself in the boathouse with his drunken friend Hitchens.

My imagination is running away…Fr Crean begins rowing by outlining Prof. Dawkins’ essential argument, and what a weak argument it is. Dawkins says that God would have to be terribly complex to have invented the world and therefore he would have to be so very complex not only to have invented the world, but to keep it going and answer all those prayers and so forth, and who could invented him then? An even more complex being and so on and so forth. Fr. Crean dismantles it immediately by showing us how God is not complex but simple. He explains the simplicity of God easily and clearly enough, and it is a concept that anyone even a little bit familiar with the philosophy of Thomas Aquinas would have not only learned, but understood.  I don’t have time to explain it all here, but clearly the summa was not part of Prof. Dawkins’ homework in preparation for writing.

In the second chapter Fr Crean takes us through Thomas Aquinas’ famous proofs for God’s existence, Dawkins’ objections and the counter arguments. This is good solid stuff, but the real fun begins with the next chapter about Dawkins and miracles. He is relentless in his pursuit of Dawkins’ shallow arguments, false assumptions and logical fallacies, and as he goes Fr Crean continues to get into his stride. The chapter on Dawkins and the gospels is one of the best. Here Dawkins show his amazing ignorance. He tells us that the gospels are a collection of tales written long after the events and are no more historical than the stories of King Arthur. Fr Crean pulls out fact after fact after fact: the gospels are closer in time to any other ancient historical figure. Their language and knowledge of the ancient world are spot on. There are thousands more manuscripts and more textual evidence than for any other historical figure of the ancient world. One of the best moments is when he says one of the most ancient manuscripts of the gospel of John is not held in a monastic library in Egypt or Turkey, but just down the road from Prof Dawkins’ house in the Magdalene College Library in Oxford. Wasn’t Prof Dawkins aware of the existence of this priceless artifact in his own town? Clearly not.

The rout goes on through Dawkins’ sophomoric views on the origins of morality and the origins of religion. The chapter on Dawkins and the Catholic Church is my second favorite. Once again Dawkins astounding ignorance about the Catholic Church is displayed by Fr Crean. The poor Cambridge don is amazed and bewildered by Dawkins utter ignorance not only of the fine points of Catholic belief and behavior, but of the big picture as well. He simply doesn’t get it. To quote Terry Eagleton’s famous quip, “Reading Dawkins on theology is like reading a book on biology written by someone who has only ever read the Big British Book of Birds.

Of course I am biased. I’m on Fr Crean’s side from the beginning. But you don’t need to be to appreciate his learning, his sharp writing style and his clear and ironic intelligence.

It’s a shame that this book will not be as popular as Dawkins. I have a skeptical relative. I’m going to buy both books and ask him to read them. Then I hope we’ll get together and have a good old chin wag.

I suggest you do the same.

You can read Carl Olson’s interview with Fr Crean and order the book here.