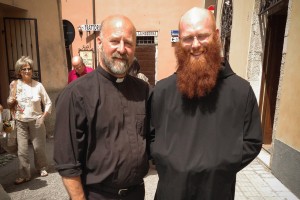 My article for Aleteia this week is an interview with Br Augustine Wilmeth–a monk of Norcia.

I first met Brother Augustine Wilmeth when he was one of the students where I served as chaplain. As a convert, he was intensely interested not only in his new Catholic faith but in the more traditional expressions of life and worship.

I followed his progress through the years and had the chance last summer to visit him a few months before he took his first vows as a monk at the Benedictine monastery that has been reestablished at Norcia in Italy.

Brother Augustine spoke to me for Aleteia about his vocation, his life in the monastery and his work brewing and bottling beer.