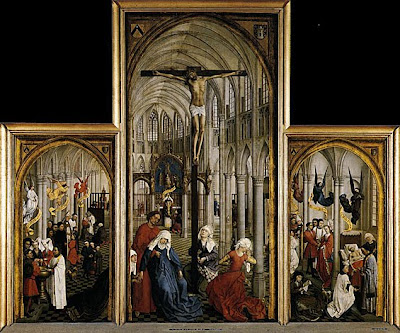 Since coming into the Catholic Church I have become increasingly bewildered by the Protestant objection that Catholics believe in salvation by works. Often the Catholic is accused of believing this because of his reliance on the sacraments, but this can only be held by someone who does not understand the Catholic view of the sacraments.

The non-Catholic perceives the sacraments to be performed by human beings through a humanly invented religious institution. These ‘works’ are something Catholics perform and receive in order to get salvation. They are added to by the ‘good works’ Catholics have to do in order to ‘win merit’ and get into heaven.

Once this is understood it becomes clear that far from the sacraments being some sort of religious ‘good work’. They are the pure, un-merited action of God towards us. The sacraments are the gift of Christ to his church through his church. When we come to baptism or communion or confession or any of the other four sacraments we come totally empty handed. ‘Nothing in my hand I bring. Simply to Thy cross I cling.’ We come to receive from him the grace of the salvation he won for us. This is exhibited nowhere better than in infant baptism, when the child, totally helpless and reliant on others is brought (like the paralyzed man who was lowered through the roof) to the feet of Christ.

We respond to this outpouring of grace with faith and faith-ful actions, but even then, it is Catholic teaching that the faith we have and the faith-ful actions which result are themselves inspired and empowered by grace.

I have never been very intrigued by the justification debates because it seems to me that once this Catholic understanding of total reliance on grace is established as a foundation that all the rest of one’s understandings of justification etc. are taken care of.

But there it is. I’m not great theologian I fear, and where the theologians see nuance and little problems I am blind.