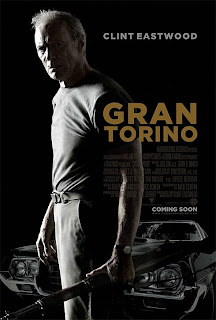 On the flight out to St Louis last week I watched Clint Eastwood’s lastest film. Gran Torino is the story of a grumpy old Korean war vet named Walt who lives in a working class suburb that has been taken over by immigrants. His wife has just died and his kids have good jobs and have moved up and out. He’s grieving and grumpy and scared. Then he establishes a friendship with a young oriental kid next door.
Walt is a Catholic, but he doesn’t have much time for the nice young priest who tries to help him. Eventually they both learn more about life and death and faith and love.
I won’t spoil the movie for you, but I highly recommend it to you. You should know that there is some strong language and violence, but overall the film is very redemptive and very positive in its treatment of Catholic themes. It’s a deeply human drama, dealing not only with bereavement, but with the shifting of American values, immigration, lack of aspiration for young people, gang culture and the love and loyalty of family.
I think we often do not cut Hollywood enough of a break. There are some excellent writers at work today, some artistic and thoughtful directors and they’re making some top notch films.
Give Gran Torino a try.
PatheosDwight2009-07-27T18:52:00-04:00July 27th, 2009|Categories: Patheos|0 Comments