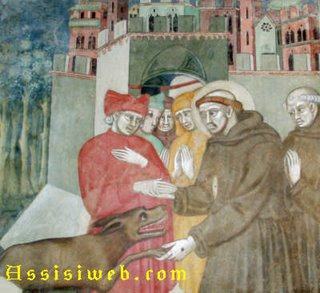 Here’s St Francis with the Wolf of Gubbio, but did you know that St John Bosco had a sort of familiar guardian angel type dog named Grigio, who hung about protecting the saint on his forays into the bad part of town in nineteenth century Italy? This huge gray dog appeared out of nowhere, and when the saint was in trouble would attack and chase off the bad guys. Sometimes he would whine and warn the saint not to go out, and then it would turn out that the baddies were planning to attack Bosco.

The other delightful thing about these saints and their big dogs is that when you put them all together it sounds like one of those Italian circus acts…”Now ladies and gentlemen, appearing in the center ring…(fanfare of trumpets and roll of drums) all the way from Italy…the famous clowns Bosco and Francesco with their world famous performing dogs…Gubbio and Grigio.

In fact, its not too much of a stretch. Francesco was called ‘God’s juggler’ and Bosco acrobatics to attract people to hear him preach.