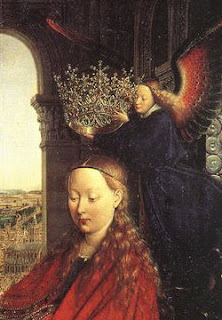 The gospel reading for the Queenship of Mary is the story of the Annunciation, and what struck me at Mass today was the fact that the royal status of Mary was established on earth historically before it was established in heaven. First of all it was established because Mary was the wife of Joseph, who, Matthew’s geneology tells us was descended from King David. Secondly it was established through the message of the angel. Mary’s son will receive the throne of his Father David, and he will rule of Israel (Lk.2:32,33) This fact makes Mary the Queen Mother of Jesus the Lord, the King of Israel.

Her crowning in heaven is simply the ultimate fulfillment of her role on earth. When we see her in the Book of Revelation crowned with twelve stars (Rev.12:2) the symbolism and her function are complete. The twelve stars represent the twelve tribes of Israel and the twelve apostles–symbolic of her son’s rule as the King of Israel and the everlasting Ruler of the Apostolic Church. Her role as Queen of Heaven is therefore the completion of her role as the hidden Queen Mother of the King of Israel here on earth.

What I find intriguing about this is the idea that an event in heaven parallels a reality on earth. If this is the case with Our Lady, then perhaps it is also the case with all of the redeemed. Mary’s Queenship on earth was always humble and lowly and full of suffering– for a sword pierced her own heart also. However, this lowly and humble Queenship on earth was magnified and brought to its full reality and full glory as she was assumed into heaven and crowned as the Queen Mother of her Son.

Is it the same with us? I think so. Certainly our participation in the sacraments is a time when our actions on earth are mirrored in heaven. When we repent the angels rejoice. When we participate in the Eucharist we share in the wedding feast of the Lamb in heaven. When we are baptized, confirmed or ordained we are given a new and everlasting character.

Furthermore, perhaps all our earthly sorrows, trials and tribulations have a parallel version in the cosmos–a sort of mirror version which is far more glorious than we can ever imagine. Are our lives hidden? Do we struggle day after day to realize the glorious royal potential to which we are called? I believe on the other side it will all be transformed. Here we see through a glass darkly. Then we shall see things as they really are. Then we will be blinded by the awesome beauty of reality, for we shall see Him as he is who is Reality itself. Then every last detail of our lives will be redeemed and transformed into an intricate and eternal plan of glory that is far more beautiful and profound than we can now comprehend.