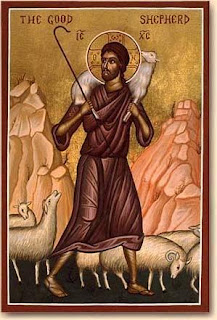 I read not long ago about a guy who was visiting a village in Yorkshire in England. He was sitting outside the pub with a pint of ale and two shepherds came down from the hills with their flocks of sheep. At the end of the village the street split into two and as he watched the shepherds went two different ways. The sheep from both flocks were crowded together, but when their shepherd went down the road to home they called the sheep softly and like magic the two flocks went their separate ways.

The fellow instantly remembered Sunday’s gospel about the sheep hearing the shepherd’s voice. I thought of the story too as I read the gospel and realized that it is true that we really can learn to hear the voice of the Lord telling us what to do. One of the clearest times I remember it in my own life was when I was living in England feeling called to be a priest and it wasn’t happening for all sorts of complicated reasons. On my knees before the Blessed Sacrament I said, “Lord, what am I supposed to do?”

Clear as could be I heard, “Keep doing what you’re doing.”

“But I’m supposed to be a priest! Doesn’t your church need priests?”

So I kept doing what I was doing, working for a Catholic charity that helped convert clergy, visiting parishes each week and writing books and articles. Then eventually the way opened up for me to be a priest, but it was in God’s time and in God’s place and has been far better and more perfect for me than if I had been ordained in England.

The point I’m making is that it is possible to hear the shepherd’s voice. Of course this is a skill and one which is ever harder to accomplish in today’s world where we seem to think it necessary to watch TV or computers or iPods and have our earphones plugged into our head 24-7. How can we every hope to learn to listen to the still, small voice if we never allow ourselves any silence?

Last thing is this: if you do hear God’s voice you’d better obey it. If you hear God’s voice clearly and then disobey you will not be able to hear the voice so clearly the next time. Then if you disobey again the voice will be even more faint. That’s not a surprise. In order to hear someone whisper to you, you have to be close to them. If you’re going away from the Shepherd how do you expect to hear his voice?