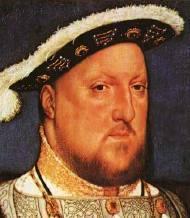 On his deathbed, the man with the cruel, piggy eyes to the left cried, “All is lost. Monks, monks, monks. So, now, all is gone–empire, body, soul.

Was this the final cry of a man who was lost, or was it expressed as a final regret for his violent and pitiless life? God only knows.

Knowing the extent of his degradation, cruelty and wanton pillage of the Catholic Church the natural human reaction is to hope that he is roasting in the same lake of fire as Stalin, Mao, Caligula and Pol Pot. However, he too was a human soul. He too was destined for glory. If we are commanded to pray for our enemies we had best pray for him too.