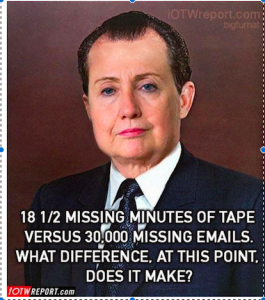 More and more Americans are beginning to connect the dots and realize that the corruption and sleaze of the Clinton clan makes Richard Nixon look squeaky clean.

The fact that the American press give Mrs Clinton a pass on her blatant obstruction of justice is amazing.

Maybe its the Amish in me, but I have thought for some time that both Obama elections were rigged. His lack of passion and enthusiasm in campaigning in 2012 indicated to me that he knew he already had it in the can.

The same thing seems to be true about Hillary. Her electioneering efforts have all the marks of someone simply going through a routine for the cameras because she knows that the nomination and the election are already hers. She deserves it. She bought it.

Consider her three day visit to Iowa. When Rick Santorum ran in 2012 he realized that Iowa was crucial and with no money or staff he got out and really did meet the people. He criss crossed the state in one supporter’s beat up pick up truck genuinely listening to people and spending time with them. So he won the state.

Hillary, on the other hand, makes a three day visit with a few stage managed stops, then flies home to her mansion in New York.

And the American people want her to be the next president. Geesh.