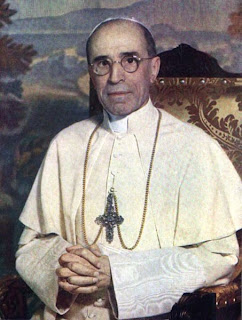 More evidence is emerging about the heroic efforts Pope Pius XII took to save Jews from the holocaust. You can read about it here. The vicious attack on Pius XII started with a stupid and inaccurate play in the 1960s and continued with John Cornwell’s pitiful and scandalous book ten years ago. Then the idea that Pius XII was Hitler’s Pope continued in a series of breathless and journalistic smears, and it has now entered into the popular anti Catholic realm of urban myth. I hope the latest evidence will help put it to rest.

If anyone doubts that the Catholic Church and the papacy are constant targets for biased secular atheistic forces who hate the faith, let them simply do the homework on this most constant and biased attack on a noble, shrewd and holy pope. A short defense and explanation of the facts is here. When the play came out in the 1960s it was criticized by an army of scholars, and Cornwell’s awful book has been corrected with Ronald Rychlak’s scholarship as well as an excellent book by Jewish scholar David Dalin. With hindsight I think we forget just how delicate relations were for Catholics in a Europe dominated by the demonic forces of Nazism. It will emerge more and more that not only was Pius XII courageous and holy, but he was also very smart in handling the whole situation.