Holding Up the Tent Posts

Holding Up the Tent Posts 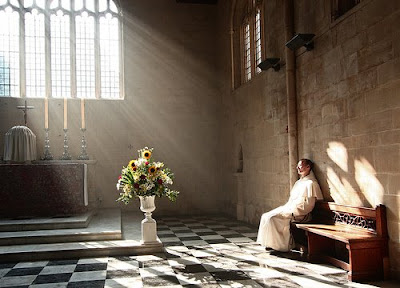 Yes, I know, Corpus Christi was supposed to be yesterday, but our bishops say it should be celebrated on Sunday. I’m not going to go on a sniffy rant about how I think it should be kept on Thursday and we’re dumbing down the religions etc. etc. Life’s too short. It’s Sunday and we’ll observe it on Sunday.

But coming in to school this morning I was listening to Catholic radio with several priests commenting on their own experience of celebrating Mass. One priest said he has to make an act of faith every time he elevates the host. I understood this to mean that he doubts what he is doing every time he celebrates.
I don’t have that experience. Instead my experience of saying the Mass is almost exactly the opposite. I believe in the Real Presence at that point, but not in a limited way of the miracle that happens alone. I do believe that the bread and wine become the body and blood of Christ, of course I do, but there is more to it than that.
It depends what you mean by ‘Real Presence’. Some people focus on the word ‘Presence’, but I’m always drawn to the word ‘Real’. At that moment not only is the Real Presence of Christ’s Body, Blood, Soul and Divinity there, but along with this is everything that is Real.
What I’m getting at is this: when I celebrate Mass I feel like I am in touch with Reality, and in that presence everything else seems unreal. The whole tragic comedy of what everyone else calls the ‘Real’ world seems suddenly vapid and vaporous. Did Madonna adopt a child in Malawi today? Did a boy pop singer tell the world he was a homosexual? Did Susan Boyle have her eyebrows plucked? Did they recover more bodies from a crashed airliner? Did the President give more money to bankers?
At Mass the Body and Blood of Christ are the depth realities. This is reality. This is contact with the eternal.
How else can I express it? I mean to say that on this reality everything else that is beautiful, good and true depends. Should the Eucharist be taken from the world, our world would collapse into a shallow hell of emptiness and ephemeral illusions. The whole silly circus tent would cave in if this Reality of realities were taken from the world.
So when I say Mass each day I see myself having the solemn privilege of holding up the tent posts. It’s the work of Atlas, if you like, bearing up the world on his shoulders, lest it should fall.
PatheosDwight2009-06-12T08:33:00-04:00June 12th, 2009|Categories: Patheos|0 Comments