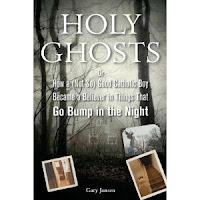 Gary Jansen lives in the house where he grew up. His mom always said there was a ghost there, but she was a little bit strange and he never took it seriously, then his little boy doesn’t want to go into his room and Gary starts getting creepy feelings up his back. To add to the creepiness there’s a funeral home across the street, and a history of violence in the neighborhood. Gary’s a Catholic, but not real passionate about his faith.

Here’s a story of a man who was open minded about the supernatural, really had odd things happening in his life and determined to get to the bottom of it. He’s right that the Catholic Church doesn’t really teach very much about ghosts. It’s the same with a lot of paranormal activity. The Church doesn’t teach specifically about these things. It mostly says, “Don’t get involved with that stuff. Leave it be.” On the other hand, the ordinary practice of the Catholic religion should take care of any problems in the interface between this world and the next. Got ghosts? A house blessing should do the trick. Troubles with dead relatives haunting you in some way? Requiem masses, prayers and acts of reparation for the dead will take care of it. Something nastier hanging around? A minor exorcism will often take care of it.

What I like about this book (and why it compares neatly to fictional horror tales) is that we’re taken into the very ordinary life of the author. His little boy is just an ordinary little boy, except that his toys turn on and off on their own, doors slam in his room and there are cold spots. The author and his wife are an ordinary young couple except that there are inexplicable tensions, sleepless nights with no reason, odd occurrences that climax in a house cleansing that finally works. Along the way Jansen weaves in philosophical and theological musings, teaching about the Catholic faith (which I suspect he was more keen on than he lets on) and the process of his own growth in faith through the project. In other words, he tells a good story and fits the teachy preachy bits into it without you minding.

Some orthodox Catholics have a problems with Jansen’s resolution of the problem with ‘ghost buster’ Christine Winkowski, rather than a priest, but I don’t see this as a problem. Its a fact that some people have what might be called psychic gifts. They see things most people don’t. I knew an Anglican priest once who regularly ‘saw’ the people he was praying for at requiem masses–he said they appeared as solid people although he knew they weren’t. If a lay woman with such a gift uses them to help people cleanse houses and helps restless souls find peace I don’t see why this is a problem. Should she use the gift to make money and attempt to communicate with the dead in seances and practice sorcery that’s a different matter.