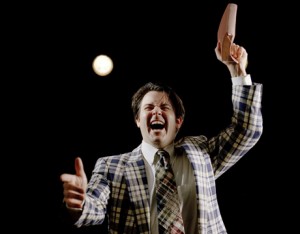 In an effort to understand where Americans are in their religious viewpoints, I am spending more time reading the religion columns at the Huffington Post.

The impression I receive is that the vast American media public are totally conditioned by fundamentalist Protestantism.

The majority of articles written by atheists, agnostics and liberals are in reaction to fundamentalist Protestantism.

It is as if that is the only form of Christianity they have ever heard of. Catholicism and Orthodoxy are absent from the debate.

Take this article for instance by a gay person. He argues effectively that it is a waste of time for liberals to pretend that Jesus would be tolerant of homosexuals. He says the Bible clearly prohibits homosexuality and says liberal gay people should be more honest and admit that the Bible condemns homosexuality and they should not waste time over it and just reject any notion of Biblical authority.

Because Protestant fundamentalist presents sola Scriptura as the default Christian setting, I am convinced that they create great hordes of atheists–former fundamentalists who get some education and think things through and reject fundamentalism and Christianity with it.

In the modern world a fundamentalist reading of Scripture is so clearly unsustainable that those who wish to reject Christianity have no problem doing so.

To take the homosexual argument–all they need to do is say, “So the Old Testament says homosexuality is an abomination. It also says you should eat pork or lobsters. Duh. That’s dumb. How can you quote one verse from the Old Testament and ignore the others?” It’s enough of an argument to end the debate for most people.

Catholicism, of course, is not a Bible only religion. Continue Reading