If the Left Smacked Pope Francis As They Do Mother Teresa…

If the Left Smacked Pope Francis As They Do Mother Teresa… 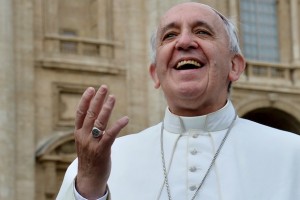 What if the left wing secular atheists attacked Pope Francis the way they do Mother Teresa?

Can you believe what this so called “saintly pope” did yesterday? He gave 1500 homeless people a pizza party. That is sooo condescending? He’s able to live an a Renaissance palace if he wants to, and he “lowers himself” to give homeless people pizza??? How cheap is that?

The people needed a proper meal and proper nutrition and he gives them pizza? It is clear that he wants them to remain poor, otherwise he would give them far more than a slice of cheese pizza. I guess his favorite Bible verse is, “the poor you shall have with you always” so shrug your shoulders and tell them that poverty makes them closer to Jesus and they should be satisfied with that.

He gives them pizza when what they really need is job training, counseling and a permanent roof over their head. Furthermore, Francis is a resolute opponent of assisted suicide. Doesn’t he know that the best was to get rid of poverty is to help poor people to end their misery? If he really cared about the poor he would help them to die with dignity–not continue their misery with a measly slice of pizza.

If I remember rightly, Jesus of Nazareth (if he ever really existed at all) did a similar trick. He was all nice to poor people, but in the end was happy to go to dinner with rich people and allow women to fawn all over him, pouring perfume on his feet and all the rest. It’s disgusting. Jesus–just like Francis–says he want to help the poor, but did he stand up to the Roman war machine? No. Did he stand up to the wealthy international Jewish bankers of Jerusalem? Not really. Oh, he staged that little protest with whips and tables in the temple, but that was all show wasn’t it?

Pope Francis is actually running a money machine himself. Can you imagine how much all those art treasures are worth in his “Apostolic Palace”? Has anybody ever seen the books of the Vatican Bank? No. Instead there is scandal after scandal as Pope Francis rakes in the cash, stashes it away to pay lawsuits against pedophile priests while he plays at “poverty” living in considerable style in the modern and comfortable St Martha’s House and using the millions that Vatican Incorporated brings in to give a few homeless people a slice of pizza…