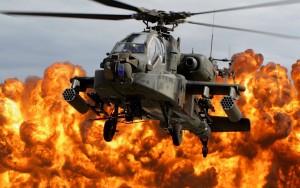 There’s some fuzzy thinking among Catholics on the issue of abortion and war. The argument goes like this: “Vote Democrat and innocent babies get killed through abortion. Vote Republican and innocent people get killed in an unjust war. Since you’re going to end up with killing either way, let’s ignore those issues and focus on the economy.” The subtext is, “I’m going to vote Democrat even if their candidate does support partial birth abortion.”

The present Democratic president…winner of the Nobel Peace Prize no less…has been pretty adept at killing people with  America’a vast and indomitable military machine, and Hillary Clinton does not come across as Little Miss Muffet. Looking at the historical record I suspect Democrat presidents and Republican presidents have both been happy to send our soldiers out to war.

But should someone make the case that war and abortion are both just as bad, there are some other points to make.

First you have the question of proportion. How many people are being killed through abortion and how many people are being killed in American military action?I don’t have the precise statistics, but the deaths from the wars are in the thousands and the deaths from abortion in our country alone are in the millions. Because of the difference in the number of deaths these two issues are not morally equivalent.
Second, we must consider the ‘innocence’ of the deaths. The death of one totally innocent, vulnerable unborn child who is incapable of self defense must be more morally outrageous than the killing of an armed opponent in war. With abortion the child killed in the womb is attacked totally and has not even the idea of proper self defense or intentional involvement. An opposing combatant has chosen (at least partially) to take up arms and be involved in a possible killing himself.
Third, we must consider who perpetrates the killing and their knowing involvement and participation. A soldier who goes into combat is trained to kill, however, he is also trained to kill only as a last resort. A good soldier is first trained to avoid killing and to take the enemy prisoner if at all possible, and he is supposed to treat the prisoner humanely. In war this does not always happen, but consider the abortionist or one who procures an abortion: in every case they set out intentionally to kill and to do nothing but kill an innocent human being. Politicians who support abortion therefore enable those who wish to kill an innocent and defenseless child. Even if the particular war is unjust, the soldiers and politicians who instigated the war were doing so (even if in a debased way) not to promote killing, but to promote a final goal of justice and peace.
Fourth we must consider the possibility of self defense. An enemy combatant can arm himself and fight back. An unborn child is attacked while totally defenseless and is unable to defend himself in any way.
Fifth, we must consider the innocent deaths of those who have died in American military action. In the Middle East the largest numbers of those killed have been killed by fellow Islamic terrorists, not by American soldiers. Along with this. we must consider the intention of the American soldiers. They have not intended to kill innocent civilians, even if some have been killed. Furthermore, they have been trained not to promote the terrorist attacks that have killed so many, but to stop them–even at the expense of their own lives and through their military operations.
Notice that the arguments above are not concerned with the justice or the injustice of any particular military action, and I am certainly not banging the American war drum and saying war is good. If anything, I tend toward my Amish roots of pacifism when it comes to war, but This is a separate argument altogether, and one that can be properly put by those who wish to argue one way or another.
However, to say that involvement in a war in which people are killed is the moral equivalent to abortion is lazy, dumb, or willfully rebellious against simple truth.
PatheosDwight2016-09-03T08:24:23-04:00September 3rd, 2016|Categories: Patheos|Comments Off on War and Abortion