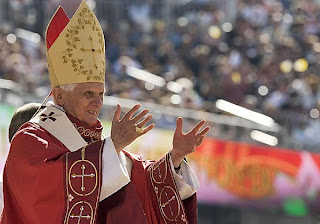 I am reading a conversion story and apologetical book called An Invitation Heeded published at the end of the 1800s with a view to editing it for re-publication by the Coming Home Network. In the chapter on infallibility the author makes the very good point that rather than the Catholic Church’s stance on infallibility being nonsensical, it is the churches who deny infallibility that are absurd.

The essential Protestant position is, “Our church is merely a human institution. It is not infallible.” And yet they demand allegiance of the faithful to the beliefs and moral teachings of their church. But if their church, by their own insistence, is fallible how can they demand obedience and loyalty to their teachings? There is a logical hiccup here of enormous magnitude.
“Ah!” the Protestant will object, “Our church is fallible, but the Holy Scriptures are not, and it is the Holy Scriptures in which we place our confidence–not in the traditions of men.” Of course, this begs the question because Protestants of every stripe–from radical Episcopalians with their Mother Goddess worship and homosexual marriage to mainstream Evangelicals to Jehovah’s Witnesses all claim that their beliefs and practices are derived from and at least consistent with Scripture.
In fact, while denying that their leaders are infallible, every religion must act as if they are infallible, otherwise their religion would cease to function. Whenever Bob the Baptist steps through his church door he functions on the basic assumption that his pastor does not teach error in the matter of faith and morals. (this is the definition of infallibility) Likewise, Esther the Episcopalian and Martin the Methodist and Frank the Four Square Apostolic Church of the Redeemed of the Fourth Degree-ist all assume that their pastors teach without error–otherwise their religion wouldn’t work. They have to assume infallibility in practice, even if they deny it in theory.
The fact of the matter is, all religions function on the assumption that their church leader is infallible. Catholics are just the only ones who dare to make the claim, and how can Catholics make such an audacious claim?
There are only three options: 1) they are insane and deluded 2) they are liars 3) It’s true.
PatheosDwight2009-02-17T08:44:00-04:00February 17th, 2009|Categories: Patheos|22 Comments