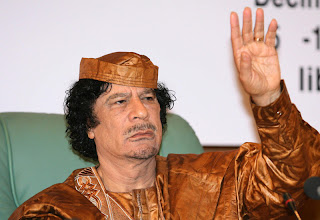 With the revolutions in Egypt, Tunisia and Libya the hope is expressed that the people of these countries will be able to establish democracies.  The assumption is that democracy is better than monarchy or communism or single party totalitarianism or a dictatorship. Is Democracy (in and of itself) a better form of government?

I don’t think it is necessarily. In our ‘Democracy’ do we really have government ‘of the people, by the people and for the people?’ or do we have a massive bureacracy with decisions being made by unelected ‘experts’ appointed by other unelected ‘experts’. Are our rulers really elected by the people or are they puppets manufactured by slick media men funded by large corporations, wealthy individuals and special interest groups? Is our democracy ‘for the people’ or ‘for the fat cats?’ Are the fabulously wealthy, corrupt elite at the top of our society any better than Gadaffi, Mubarak and the rest of the mega wealthy tyrants across the world? They and their powerful friends manipulate the world economy and when they use the armed forces to control our ‘strategic interests’ around the world–and end up oppressing the poor–they might have better dress sense and be have a nicer image, but are they any more righteous?

Do we really get the best rulers when they are elected by the majority? Are the majority necessarily good, noble and true just because they are the majority or if the populations are themselves corrupt, will they not elect a corrupt person who promises them a short term solution, and buys them out with bread and circuses? The decadent and self serving people will elect a ruler who is also decadent and self serving. We get the rulers we deserve.
Perhaps I’m exaggerrating to make a point, and the point is this: any form of government is only as good as the people in the nation that makes up the government. Any police force is only as good as the people it polices (for it is from that group of people that the police come) Any political system is only as good as the individual politicians, judges or rulers. A monarchy that is built on noble, self sacrificial principles may be a good form of government under which the people prosper and are happy. A single ruler or a single party state that truly seeks to serve the people, achieve balance and share power and wealth and create opportunities may be a good form of government. Likewise a democracy built on the concept that the elected rulers are the servants of all–could be a noble and fine form of government.

On the other hand, any form of government that is dominated by ruthless, self seeking, ambitious and power hungry people will be corrupt and will eventually end in tyranny and revolution. This is why personal virtue is vital for any political system to bring about a truly good and free society. The ruler must himself be virtuous, but so must the whole society, for a corrupt society will despise a good and noble ruler just as a corrupt ruler will despise a good and noble populace.

This is where the Catholic worldview becomes so important. Catholics should not believe in the strict separation of Church and State. That is not to say we support a ‘State church’ or that explicit religion must be integrated into every aspect of national life. Instead we believe that the teachings of Christ must consciously influence the governments of the state for the good of the people. We are to be salt in the dish and yeast in the dough. Through Catholic education and the Catholic religion we should be reminding our leaders and teaching future leaders the principles of servant leadership. We should be grooming rulers who are virtuous  at the same time that we teach the people to follow those same principles of virtue and self sacrifice.

People may hold these principles without holding to the Christian religion, but without the Christian religion they will not hold them for long because there is no ultimate motivation to do so. What human being, given great power and wealth, will have the nobility of spirit and self sacrificial ideals to truly serve the people and lay down his life for them every day? Apart from the grace of God, no one, and if there were a person like that he or she would probably not be seeking power in the first place.

This is why, in the end, political solutions to the world’s problems are not the ultimate answer. G.K.Chesterton said, “Every argument is a theological argument.” Same here. Every form of government will be eventually become corrupt unless it is founded on a supernatural faith which calls all men to lay down their lives in service of others–just as the Master did.