ISIS Is Itching for a New Crusade- What Should We Do?

ISIS Is Itching for a New Crusade- What Should We Do? 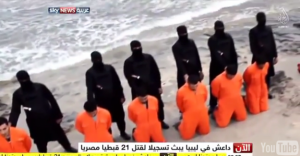 It is time for the West to wake up to the religious dimension of the ISIS horror.

The barbarians who have decapitated twenty one prisoners in Libya were completely clear in the religious motivation for their crime.

They chose Christians from the ancient Coptic church of Egypt and they murdered the men in cold blood.

They  were murdered not because they were Egyptians or Capitalists or Socialists or member of a foreign military.

They were murdered because they were Christians. Unarmed Christians from impoverished families who had travelled to find work.

In their sick propaganda the jihadists referred to the West as “crusaders” and threatened to conquer Rome.

This comes after the repeated threat to kill the pope.

It’s clear that the jihadists are itching for a fight. They seem to be calling out the Western, Christian forces. It is clear that they are motivated by their religion to go to war.

We should not underestimate the unstoppable and irrational nature of their motivation.

What will we do?

The Christian response should be also be clear. Continue Reading