It’s Not Easy Being Green…

It’s Not Easy Being Green… 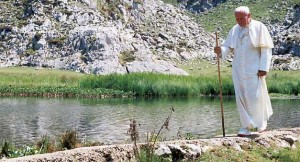 This week’s post at Aleteia explains that stewardship of the environment has been part of the church’s teaching and the pope’s agenda for some time. Benedict XVI was actually dubbed “the Green Pope” during his reign. Pope Francis’ planned encyclical on the environment will build on the work of his two predecessors.