Why Does God Allow Bone Cancer in Children?

Why Does God Allow Bone Cancer in Children? 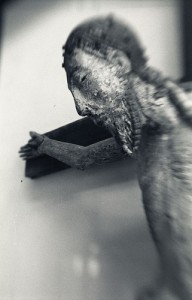 Stephen Fry’s passionate condemnation of God for creating a world with children’s bone cancer, flesh eating microbes and cannibalistic serial killers brings us to ponder the nature of evil in the world.

While Stephen Fry’s complaint reveals more about Stephen Fry than God, it is still a very popular complaint and a question worth asking.

The Christian answer is that most of the world’s evil is caused by human beings who make bad choices. I think Fry is skating around that one and posing the more difficult question. He can accept that much of the evil is caused by human beings making bad choices, but he wants to know why God allows the suffering that seems utterly pointless and random.

The Christian answer is a holistic one. That is to say, the whole cosmos is caught up in the network and pattern of evil and suffering. St Paul put it like this: “The whole creation groans for redemption.”

How to explain this?

The best metaphor is a theological application of the Butterfly Effect in Chaos Theory. Simply put–one very small event can alter outcomes significantly later. We experience this all the time. We say one small negative word. It turns into a viral gossip chain. We make one small bad decision when we’ve had too much to drink when we’re seventeen and the whole course of our life is changed forever. Furthermore, that change affects everyone else in our family and network of friends.

We say the bad choice of our first parents infected the whole world. From that one bad choice an epidemic of evil was released like a horrible virus or an unstoppable infection. Like the horror film Bodysnatchers–a tiny and seemingly insignificant seed produces a terrible and all pervasive weed.

So all of nature is riddled with an evil and suffering that cannot be understood and eradicated. It has become part of the system, and it does not necessarily have a logical link anymore with any human choice for evil. We can’t understand how this works any more than we can understand how the butterfly flapping it’s wings in the Amazon might influence a hurricane in the Philippines. We can’t understand the pattern and we can’t explain it and we can’t prove it. It remains a theory….but a good theory I think.

Why does a child get bone cancer? We don’t know, but use the butterfly effect and it will all come back to bad or at least ignorant human choices. Maybe there is a chemical in our modern diets that causes cancer and nobody knows about it. Maybe there is radiation emitted from the technology we have which we don’t know causes cancer. Maybe a person is genetically disposed to certain cancers like some people have mold allergies and others don’t. Why? Maybe because a family carries a genetic disposition because thousands of years ago their tribe was under perpetual stress through threat of violence and fear. Maybe that genetic disposition in the modern world makes them vulnerable to cancer.

Add in the psychic and psychological factors and it gets more intriguing and complicated. Maybe that family came from a tribe long ago in which a child would always be sacrificed when the tribe was in danger. Maybe in a horribly weird way there are psychological and psychic echoes in the lives of the living. Maybe this horror echoes down into the present day or maybe the evil is more recent. Maybe the child was never wanted. Maybe the pregnancy was unplanned and in the earliest stages of development the child had implanted a kind of death wish that comes true later.

Why doesn’t God do something about it? Christians believe he has, but the way he has is far more profound and far reaching than him simply stepping in and saying, “Now, that’s not very nice is it? Let’s make things better. Here. I’ll use my magic wand.”

The problem with Fry’s complaint is that he hasn’t taken the time to really ponder the question. He’s satisfied with a superficial atheism.

What is the response?

While the theological answer may give some intellectual satisfaction, more is required. Continue Reading