It’s the ACTS of the Apostles, People!

It’s the ACTS of the Apostles, People! 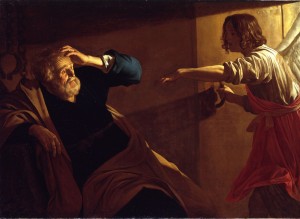 Peter Being Delivered from Prison

One of the things which gets me charged up during the Easter season are all the readings from the Acts of the Apostles.

We take this marvelous fifth book of the New Testament for granted, but consider how important it is that the book records the ACTS of the apostles.

It’s the ACTS of the Apostles.

Amazed by the resurrection and empowered by the Holy Spirit, they got up and went out to change the world for Jesus Christ. They got into boats and tromped across deserts. They lodged in cities and earned their own bread crust however they could. They healed people, performed miracles, argued with each other, slept rough, went to prison, were delivered by angels, were shipwrecked, beaten, escaped from persecution by being lowered in a basket over the city walls, argued with atheists, denounced the wicked, argued with kings, were misunderstood and finally tortured and killed for Christ.

They were men of action and didn’t pussyfoot around. They didn’t sit on their backsides contemplating their navels.

They didn’t spend all their time pondering and wondering and arguing fine points of this and that.

Sure debates and apologetics, preaching and teaching were part of their calling, but this was done in the context of a greater action of preaching the word and sharing the good news of Jesus Christ.

Read the Acts of the Apostles and notice something else that has shifted in our modern church.

An awful lot of Catholics think the main task of the church is to be a charity for the poor.

You don’t see the Apostles out there feeding the hungry and housing the homeless. Their main task was prayer and preaching and teaching and leading the worship of God. They established the diaconate to feed the hungry and administer the corporal works of mercy and the enlivened the whole church to do the same, but the acts of the Apostles were not primarily the acts of Christian charity.

There is much nail biting in the church about the state of our society, the decline of faith and the dwindling of the church. Continue Reading