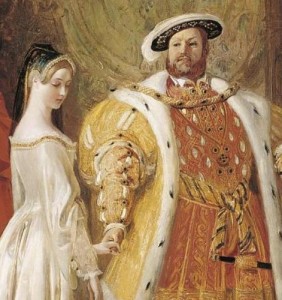 You’ve heard about Kim Davis the ordinary government clerk who stood up for what she believed in the face of powerful opposition.

Maybe you have not heard about Elizabeth Barton. She was a nun in sixteenth century England who stood up to Henry VIII when he planned to marry Anne Boleyn.

There are interesting similarities between the two. You can read my article about Elizabeth Barton here on Imaginative Conservative.

One of the most remarkable characters of the English Revolution of the sixteenth century is Elizabeth Barton. An illiterate mystic who challenged Henry VIII to his face, and was eventually martyred for her stance, Barton influenced the course of history as a small boulder affects the flow of a mighty river.

Elizabeth Barton was born in 1506 in the hamlet of Adlington just twelve miles from Canterbury. The illiterate (and possibly illegitimate) girl was working as a servant for a local farmer in 1525 when she began to experience visions. The visions were apocalyptic in nature and were accompanied by a serious illness—probably epilepsy.

During her illness she would fall into a trance after which she related “wondrously things done in other places whilst she was neither herself present nor yet heard no report thereof.” Her utterances impressed her religious superiors and were said to be “of marvellous holiness in rebuke of sin.”

Barton was an obscure woman who became a famous personality because of her religious visions, beliefs and courageous stance.

Kim Davis was also launched from obscurity because of her resistance to a form of marriage she could not condone.

Go here to read the full article about Elizabeth Barton.