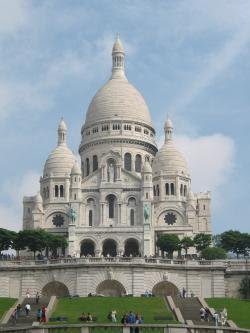 I was eighteen years old and had just graduated from High School when I went to France on a mission trip with some other young Evangelicals. We were working with a mission called Slavic Gospel Association. Our mission was to transport Bibles into the communist countries.

At the end of the mission we spent a few days in Paris. I remember being charmed by the city, visiting the Eiffel Tower, and visiting my first Gothic Cathedral–Notre Dame. I especially liked wandering through the artist’s quarter–Montmartre.
It was there, on the first night in Paris, that I first visited a great Catholic Church. I went around a corner with my friends, and there like some incredible dream, was the great basilica of the Sacred Heart–all in white and illuminated against the night sky. My friends didn’t want to go in, but I did. Inside the darkness was puncuated by pools of candlelight and there was a great silence. I don’t remember much else except that I sat in a back pew, and finally got over my Protestant objections, put down a kneeler and knelt to pray.
I realize now that the Blessed Sacrament has been exposed for adoration in that church non stop since its foundation. Even then Christ was drawing me into his Catholic Church. When the Basilica was built after the terrible years of the French Revolution the resurgant Catholics wanted the basilica to be a ‘city set on a hill’ a ‘light that would draw all men to the Sacred Heart of Jesus.’
Here’s one man for whom it did just that.
PatheosDwight2009-06-19T09:03:00-04:00June 19th, 2009|Categories: Patheos|0 Comments