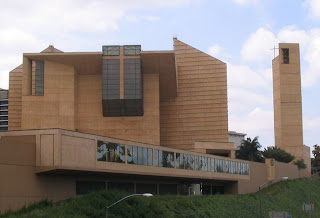 Earlier this week I attended Mass in the new Our Lady of the Angels cathedral in Los Angeles. I said in a blog post that I was surprised to find that I like the building. Perhaps I should clarify by saying that I was surprised that I didn’t totally hate the building. I didn’t want it blown up. I didn’t want to say ugly things like, “Gee, this is a cathedral! I thought it was a parking garage!” and other snarky comments.

Let’s accentuate the positive. What did I like about the cathedral? I liked the inside better than the outside. I liked the tapestries. The vast open space inside the nave of the cathedral was awesome. The subtle, sand-like colors directed the eye to the altar. The organ was good (although they used it to play hokey praise and worship music) The cathedral plaza was a nice place to gather and the bells were good.

So what was not so good? First of all, there is a basic incongruity in a building being nice on the inside and awful on the outside. Surely a sacred building works as in integrated whole in which the beauty of the exterior frames the beauty of the interior. That the exterior is ugly and the interior beautiful presents us with a basic disconnect which jars and irritates. Furthermore, doesn’t a church which is repellent on the outside but beautiful on the inside declare to the world, “We don’t much care about you and what you think. This is all about us and what we do inside of church.”

So what should the exterior of a church be and do? A church is a witness to the world. A church building preaches. It declares the gospel. Built in beautiful natural materials, it stands forever and represents a faith that is beautiful, natural and everlasting. The carvings and artwork, the lofty arches and graceful lines of the church exterior extol the beauty, permanence and grace of the faith we proclaim. A beautiful church exterior proclaims the beauty and truth of our faith. An ugly church declares that we Catholics don’t think such things as beauty matter.

Even if this were true we have to ask what the function of a church really is. The unknown architect of Glastonbury Abbey in England said, “I want to create a church so beautiful that it will draw even the hardest heart to prayer.” In other words, one of the functions of a church is to lift the heart to prayer. It is to inspire with beauty, the heart that longs for beauty. Indeed, the medieval churches in England are vast, lofty and totally inspiring. Historians tell us that many of the huge churches in little towns and villages could never have been filled each week with the population of the place. They were built in a time when utilitarianism was not heard of, and if it were ever spoken it would have been recognized as a heresy.

Since one of the functions of a church is to inspire the hardest heart to prayer, then those who follow the dictum that ‘form follows function’ have not only failed, they have failed to even begin to understand what a church is for. Furthermore, their clerical masters who have squandered the money of the faithful on brutal travesties of churches reveal that not only do they not know anything about the tradition of sacred architecture, but they also don’t know very much about the meaning and purpose of worship.

It was not surprising to find in LA Cathedral that the worship was AmChurch in style. The music was hokey, Sunday School ‘me and Jesus’ music. Have they no concept of the great tradition of cathedral church music? Evidently not, or if they did they consider it ‘inaccessible’ or ‘not in touch with the people.’ This patronizing attitude was evident in the style of the main celebrant who said the Mass (rather than singing it) in a vocal style I can only call ‘Captain Kangaroo’. “The Lord be with You!” was said in modulated tones forcing out a mock enthusiasm like some kindergarten teacher. “Now boys and girls, today we’re going to have a story about a bunny rabbit!”

Absent was any idea that the worship itself should also inspire the hardest heart to prayer. Gone was the tradition that cathedral worship especially should be lofty, noble, worthy and true. Missing was any concept that the Mass should itself be celebrated with reverence, grandeur, magnificence and splendor. The perpetrators of this AmChurch style would argue that such things are ‘out of touch’ and ‘not appreciated by ordinary people.’ Nonsense. This is a false humility which is a twisted kind of pride.