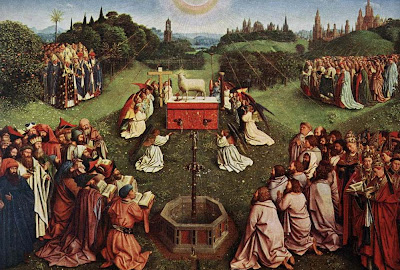 I attended Mass some time ago celebrated by an aged priest who was clearly of the 1970s ‘we are church’ brigade. He celebrated Mass reverently enough, but like many of his ilk, he altered the words when it suited his particular agenda.

So why does a liberal priest impose on the Mass words of his own which are foreign to the sacrifice of the Mass? Because he does not like the idea that the Mass is a sacrifice. He wants it to be a fellowship meal, and the shift from sacrifice to fellowship meal is an attempt to make the Mass more ‘people centered’. He want the Mass to be all about our fellowship around the table of the Lord, and the Mass as re-enactment of Last Supper fits that agenda better. Furthermore, and at a deeper level, he is uncomfortable with the whole idea of the death of Christ being an atonement for sin. He doesn’t really like the ‘primitive’ idea of blood sacrifice ‘appeasing an angry God’. He feels that a supernatural explanation of the cross as a cosmic sacrifice of the Son of God which expiates the sins of humanity is somehow ‘inaccessible’ to modern man. It is ‘not helpful’ and ‘difficult for modern people to connect with.’ A fellowship meal, on the other hand, is more understandable–more relevant and more politically correct for a ‘fellowship meal’ can carry all sorts of justice and peace connotations as well. Suddenly the Mass is all about “caring and sharing for one another and welcoming all to the table.”

I am not saying these are concepts which are totally alien to the Mass, but they are subsidiary and secondary considerations of the meaning of the Mass. They are not primary.

So where does the Mass as ‘the marriage supper of the Lamb’ fit in? Well, this is an allusion to the Book of Revelation where the worship in heaven is said to be the ‘marriage supper of the Lamb.’ This builds on the nuptial imagery throughout the New Testament (especially in the Epistle to the Ephesians. In this language of mystery the church is the bride of Christ, and heaven is the final consummation of the mystical marriage between Christ and his Church. There in heaven the two are one. Bride and groom have been united in a mystical marriage of pure and eternal love.

The Mass is the re-presentation of the full, final sacrifice of Christ on the Cross, but if it is a supper it is not the Last Supper, but the Ultimate Supper–it is a foretaste of heaven. It is a glimpse of glory. It is a participation here on earth in the mystical and everlasting worship of heaven. It is the consummation of all things, the harvest of souls and the rapture of divine love within the human soul.

And these sublime ideas and these beautiful beyond words images should be reduced to some sort of fellowship meal? As if the Holy Mass were not much more than a pot luck supper?

Please. Give me a break.