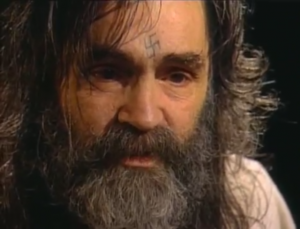 I find it odd that all the people who are talking endlessly about mercy are oddly silent at the death of  Charles Manson.

Charles Manson and other serial killers exhibit the very worst of humanity’s fallen condition, but it is these monsters of humanity that the tender hearted mercy merchants quietly ignore.

What I wonder is how many prisons the sweetness and light sentimentalists actually visit.

I go into our local prison to say Mass for serious criminals about once a month and I can tell you that some of them have asked for mercy and received it. They tell me there are many others who have no desire for mercy or forgiveness and are hardened criminals.

Do the kind hearted people who harp on endlessly about mercy ever go in to the prisons to extend God’s mercy to those who refuse his mercy?

What do they say about someone like Charles Manson who (apparently) died defiantly in his wickedness.

How do the universalists who say, “In the end everything will be redeemed. Everything” account for the Charles Mansons? Do they really believe Charles Manson will go to heaven? At his funeral will they say, “Well now Charles is at peace and he is in a happier place.”?

What troubles me is not that they want mercy for everyone. I want that too. But the problem with universalists is that they are too optimistic and therefore unrealistic about the depth of human depravity and the stubborn rebellion against God of the will of some people. They don’t wrestle enough with this issue and they take a sweet and easy way out by pretending that all will be saved.

“All will be redeemed in the end? That’s the logic of the gospel?” But the “logic of the gospel” cannot contradict the clear words of Jesus Christ who time and again warns of the dangers of hell. Jesus is not a universalist and I cannot see how anyone who is can be his true disciple.

I don’t want Charles Manson or anyone to go to hell and I fully affirm that the mercy of God would forgive and reconcile even the Charles Mansons.

Should we forgive Charles Manson? Sure, but would he accept or even want that forgiveness? Would he think he had anything for which he had to ask forgiveness?

Yes, but the big question is, “Would Charles Manson ever accept that mercy?”

As far as I know, there is no indication in this life that he did, so one remains pessimistic about his chances in the next life.

Nevertheless. Even so…we are reminded of the example of little St Therese who prayed for the notorious murderer Pranzini and who was relieved that he kissed a crucifix the moment before the blade of the guillotine dropped.