Lewis, Tolkien, Art and the Sacraments

Lewis, Tolkien, Art and the Sacraments 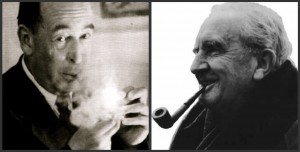 I posted quip on Facebook a few days ago: “Protestants have no art because they have no sacraments. Discuss.”

A lively discussion then ensued. Unfortunately most commenters missed my point. They either gave me examples of Protestants who were artists or they tried to explain that Protestants really do have at least a couple of sacraments.

OK, but what I was digging at was something deeper, and that is not so much whether there are some good Protestant artists or whether the Anglicans and Lutherans have sacraments or not, but what constitutes a sacramental world view. Catholic have this. Protestants do not.

First we should set out that, of course, Protestantism is on a spectrum. A harsh, Puritanical Calvinism is not the same thing as an aesthetically pleasing or liturgically satisfying Anglo Catholicism or High Church Lutheranism. Even so, to be too particular about the definition of “Protestant” or whether this group has sacraments or not or whether that group has art of not is beside the point.

His working in and through his creation and in and through human history is summed up in the incarnation of his Son. “In the fullness of time God sent forth his Son born of a woman.” In the midst of human history he took that woman’s flesh transformed it and came to us for our salvation through it.

As a consequence he said, “This bread is my flesh. This wine is my blood. Unless you eat and drink you do not have life within you.”

The sacramental vision of Catholicism simply extends this to baptism, matrimony, ordination, confirmation, confession and anointing of the sick. God comes  to us in and through water, oil, fire, the marital kiss, the laying on of hands and more. Sacramentals are the more and in a lesser way we say he comes in and through the statue, the icon, the painting, the scapular, the holy medal, the breviary, the book, the bell, the candle and the cross.

This, consequently, engenders art. It engenders good art and bad art, but it does engender art.

Protestants deny this sacramental vision. Even the most Catholic of Protestants–the Anglicans and Lutherans–deny the shocking reality of the sacraments inasmuch as their formal theology lessons the degree of belief in this sacramental efficacy. Protestants from a Calvinist and Anabaptist tradition deny it utterly and scarcely practice the sacraments at all–denying any efficacy and insisting that it is no more than a symbol, and sometimes not even that–saying it is simply a “public witness” to God’s spiritual work in their lives.

My point, now elaborated, is that because of this denial of the sacraments they also deny that art is worthwhile. The most they can do is produce art that is didactic. It must always have a lesson. So I have known Protestant artists who produced very worthy and beautiful artwork, but they always felt they had to attach to it a Biblical caption.

This is seen, for example, when we compare the work of C.S.Lewis and his friend J.R.R.Tolkien. Lewis’ Narnia stories–as delightful as they are–did not rise above a kind of allegory he called “analogy.”

Tolkien’s masterpiece on the other hand, is deeply, richly, truly sacramental. It is great art because the truth is not only embedded in the story, the story incarnates the truth…

…and this is why it is a great example of Catholic art.