Watch Out For the Weeds

Watch Out For the Weeds 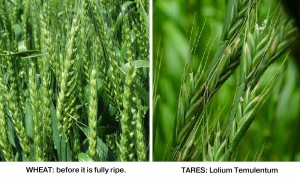 A detail from tomorrow’s reading at Mass will be missed by many people because of the translation of “tares” as “weeds”. Most people don’t know that this particular kind of weed called “tares” actually looks just like wheat.

When they are first growing together they are both green and they are very hard to tell apart. However, when the wheat ripens it turns golden brown but the seeds of the tares become black green. The head of the wheat burgeons and becomes ripe. The head of the tares stalk remains small and turns black and if eaten, is poisonous–they symptoms of the poison are like drunkenness and the poison can even be deadly.

Therefore the parable is much more profound than just “wheat and weeds”. The tares look just like the wheat so it is impossible to tell one from the others, and yet it is not only unfruitful, but poisonous.

Let me give you a hint on how to sniff out the counterfeit. Real religion is always penitent. The counterfeits cannot and do not repent. They are unable to apologize or accept apologies. This is because they are proud and a proud person cannot apologize because he really thinks he has nothing to apologize for. Nor an he accept an apology and offer forgiveness because he believes that he is owed an apology so to offer forgiveness is un necessary.

You needn’t try to weed them out. Just wait for the judgment day. Then all things will be harvested and everything that is hidden will be revealed.