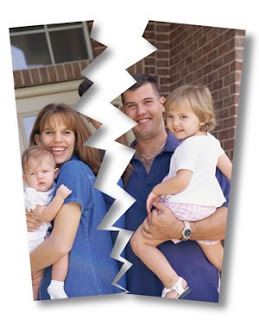 This afternoon I con-validated a marriage for the first time. It was very short and sweet, but it reminded me of all the glory of marriage and horror of divorce.

Some time ago a friend of mine was contemplating divorce. He and his wife were having a hard time and he wanted out. So I asked him, “Jimmy, who benefits from this divorce?”
“I do.” he said.
“Anybody else?”
“The kids.”
“No Jimmy, the kids do not benefit. All the research shows that the kids never benefit from divorce. Divorce always divides them in two. Who else benefits.”
He was silent.
The fact of the matter is, nobody benefits. What Jimmy didn’t understand was that his marriage breakdown not only affected him, his wife and his kids, but it also affected everyone else they know. This is because marriage is a public act. It is a public sacrament. When a couple divorces the whole world knows. Jimmy was a high school teacher. All the kids in his high school would be badly affected, at least a little, by his divorce. The other married people he knew would be negatively affected by his bad example. The people in his parish would be affected. The young people and young married couples and children would be scandalized.
Divorce is ugly and selfish and sinful. It hurts people. It rarely solves problems. It usually creates more. It rarely helps people face reality. It is more often a run from reality.
Most of all, I had to tell Jimmy that as a Catholic he was sinning against a sacrament designed and provided by God. Divorce is therefore also a sacrilege. It’s spitting on something sacred. Jimmy took sacred vows before God to love and honor his wife for better or for worse, in sickness and in health. Selfish Divorce denies all that and therefore denies God’s grace, and we know what happens to people who deny God’s grace: they go to the place where there is no grace of God.
Jimmy changed his mind.
PatheosDwight2009-04-06T16:42:00-04:00April 6th, 2009|Categories: Patheos|13 Comments