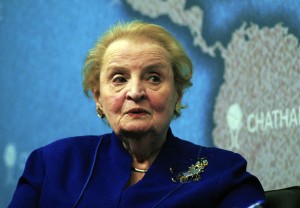 Who woulda thunk it?

The  former Secretary of State Madeleine Albright believes in hell.

I wasn’t aware of Ms Albright’s interesting background. She was born to a Jewish Czech family who converted to Catholicism. Brought up as a Catholic, the very accomplished lady (she speaks four or five languages) became an Episcopalian when she got married.

She has said repeatedly that “there is a special place in hell” for women who don’t help other women. Her comment has made headlines recently when she was supporting Hillary Clinton.

What didn’t make a headline was the shocking fact that someone with Albright’s education and connections actually believes in hell. Surely this is such an unusual fact as to be newsworthy?

Albright’s devout belief in hell no doubt comes from her Catholic upbringing, but her casualness about it is probably the result of having been an Episcopalian for so long. They’re kind of loose about hell and all that scary stuff.

Albright’s not the sort of person I would usually find myself agreeing with, but I think she’s absolutely right.

There is a place in hell for women who don’t help other women.

I’m thinking of the women who work in Planned Parenthood–from Cecile (the Lion) Richards down to the rest of the females exposed by David Daledein as women who chop up little girls and sell their organs for profit. Surely there is a place in hell for those women who do not support their unborn future women.

Then there are the women–mothers, doctors, grandmothers and abortionists who do not support other women because they allow or even endorse sex selection abortions–which kill millions of future women–unborn little girls.

I’m thinking also of those feminists who remain surprisingly mute over the oppression, mutilation, rape and torture of women by Islamic extremists. Albright’s right. There must be a special place in hell for those women who don’t support other women.

Then there are those women like Hillary Clinton who was the driving force behind the suppression of he own husband’s sexual abuse of other women. She is the one who spoke of “bimbo eruptions” and threatened, bullied and hassled the women who accused her husband of rape, harassment and abuse. Albright’s right about that. There must be a special place in hell for women who don’t support other women who are sexually harassed and abused.

Then there are the Little Sisters of the Poor. Why haven’t we heard Hillary and Madeline standing up to support those women who are being forced to go against their religious convictions by an aggressive liberal government?

Albright’s right. There must be a special place in hell for women who don’t support other women.