Mantilla on the Running of the Bulls

Mantilla on the Running of the Bulls 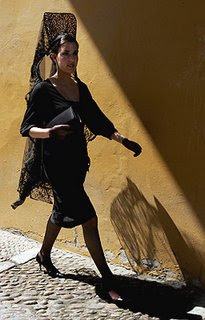 Hey hon. I’m sorry I haven’t been talking to you for long time, but me and Augusto have been taking some time together and we go over to Pamplona for the running of the bulls. This is always a big time for Augusto and his seven brothers. We like to meet up at Pamplona where his aunt Margherita lives and they boy dress up in their white pants and red shirts and they all have maybe a couple of drinks you know, and then they go running with the bulls, and we sit on Aunt Margherita’s balcony and watch them go by.

It’s a nice thing to see. I like it when the boys get to play dangerous games together. Then they come home all sweating and yelling about everything and they are maybe a little bit scraped up and have a bump on their head and it’s nice to see Mama and Aunt Margherita make a fuss and give them a drink and bandage them up.  Then we have a nice dinner.

So I am thinking that the running of the bulls is what being a Catholic should be like. You know the bull is like El Diablo. He’s big. He’s black. He’s hairy. He has these big horns. He’s mad and ready to get you, you know what I mean? Anyway, hon, I am thinking that if the church is more like running the bulls at Pamplona maybe more men would come to church. The priest should talk more about El Diablo and how we have to run away from him when we can, but sometimes, like Augusto and the other matador, we have to turn and fight.

Instead of this, they are always singing songs about ‘They shall know we are Christians by our love.” It sound to me like some kind of crazy hippy dance. All the time we get priests who maybe are sissies you know? They are telling us all about gentle Jesus meek and mild and how we have to turn the other cheek. You turn the other cheek and what happens? They smack the other cheek too, and not just the cheek on your face either hon. Let me tell you. I tell you something, when Augusto turn the other cheek its only so he can get a better angle to stab the bull you know?

So I am saying this to Augusto and he is laughing at me, and tells his seven brothers to come listen to me, and his little brother Iago, who is very sweet and serious say to me, “You’re right Mantilla. That’s beautiful. The bull is like El Diablo and we have to fight him. Then when we have Eucharist it’s like the meal after we run with the bulls. Mother Mary patches us up and we feast together you know?” Then the boys all start teasing Iago again about maybe he is going to be a priest. I think maybe he will. Iago. He make a good priest. Especially I think this when I see his face get red when they are teasing him and he attacks them and make a pretty good job of it too, giving them a few bumps on the head. And all the time they are yelling and fighting him off and telling him he better turn the other cheek.

I am thinking already of the vestments I am going to make for Iago’s ordination. I think maybe I will make them look something like the clothes Augusto wears when he is matador. Lots of sequins maybe, and all in white and red to remind the boys that being Catholic is like the running of the bulls. That’s right hon. When Iago is a priest, then he’ll teach his brothers something.