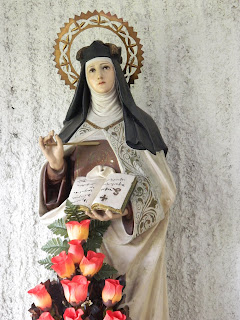 You are never going to believe this hon, but I am just getting Augusto to take a picture with his new camera when his relative who is named Casey comes up to see what is all the fuss you know? Casey is this American girl who is married to Augusto’s first cousin who owns the plantation. He met her when he was studying at college in Texas and Casey is chewing gum and being too loud. She has lots of yellow hair and her clothes are too tight. I call her “Nut Casey” because she is kind of a crazy American Protestant you know? She is what you call it? Friskypalian or something like that. So Casey say, “Look here Tomas!” (That’s her husband) “Here is proof for women’s ordination. Here is a Catholic woman who is a priest. Isn’t that right Mantilla? She is wearing a biretta so she must be priest.”

Lucky I know my stuff because I do my degree in Ecclesiastical Haberdashery at Salamanca University with Professor Monsignor Quixote. “No Casey, this is not a priestess. There is no such thing as woman priest in the Catholic Church.”

So Casey starts arguing with Mantilla. She say, “Episcopalian is same as Catholic, and there is no difference because they are Catholic too, just not Roman Catholic.” and she start telling me how their priest wear vestments and birettas and pray to the Blessed Mother and everything, and I say, “Look Casey, maybe you come from Texas right?” She say, “Si.” I say, “But just because somebody dress like a cowboy don’t make him a Texan right? It’s the same with Catholic. A ten gallon hat not make a Texan and a biretta not make you Catholic.” Then I tell Casey, “This is St Teresa of Avila, and she has the book and the pen and the biretta because she is Doctor of the Church. The biretta is a sign of her being a brainy theologian, not a sign of her being a priest. Women priest is Protestant not Catholic. 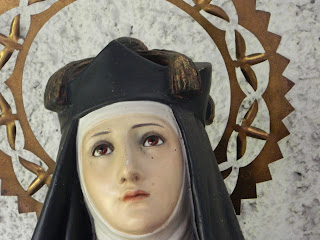 So Casey say, “What do you mean a Doctor of the Church? You mean she was some kind of psychiatrist?” Hon, at this point Mantilla is one hot chili pepper and I’m ready to hit Nut Casey over the head with my fan.

Instead Augusto say, “Come on Mantilla, let’s go outside and get a cup of coffee.” So lucky for me there is this little place where I get some really good El Salvador coffee and cool down a little, and while I’m thinking I’m coming up with a new idea you know? What if we make some of those Spanish birettas and get Catholic students to wear them instead of mortarboards for graduation time? You know there are thousands of students who wear the mortarboard. The biretta is more classy you know hon? I think there is an opportunity there and we could do something really big.

Augusto hear my idea and just smile at me that way he has, and keep sipping his coffee. I’m maybe thinking that he is thinking of something else. Who knows, maybe out here in El Salvador he is going to finally ask me the big question. Mantilla likes making birettas and vestments, but she’d rather make lots of little Augustos. You know what I mean hon?