Mantilla the Hon on Holy Fire

Mantilla the Hon on Holy Fire 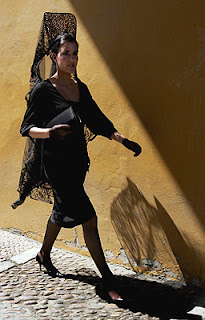 I don’t know what you mean hon. You say you were looking at these pictures of La Semana Santa in the Philippines and in Spain and you don’t like what you see with all of these men whipping themselves and being crucified, and in Spain they are wearing these outfits with hoods like the Ku Klux Klan. You think it seems kind of creepy.

OK. Give me a break you know? This is a different culture. In Spain we are more physical. We like things like bull fighting when the matador goes out and fights El Toro and kills him, and the men run through the streets with the bull chasing him and bashing pinatas with a stick and we also like to have big fights with throwing tomatoes. What’s wrong with having a little bit of fun eh?

The thing is, you Americans, you are so much like those Pilgrim fathers. You feel guilty for having a little bit of fun you know? But you like to kill bulls too. You just do it where nobody can see and then you have big steak dinner and eat maybe five cheeseburgers a day and you call that being civilized? You must be kidding me. Our people in Spain might look like Ku Klux Klan, but they’re just pretending. It’s just dressing up like you do on Halloween. It’s no big deal, and my boyfriend Augusto say that everytime he kills a bull he cries like a little baby. Do you cry like a baby when you eat a rib eye steak? I don’t think so.

And what about those men in Philippines being whipped and crucified? I tell you what hon, I can think of some men who could do with a little bit more discipline you know what I mean? Let’s be honest. Men are beasts. The stuff we women have to put up with hon! I tell you, if they don’t beat themselves maybe we ought to do it for them. Maybe these men know what horribles they are being all year long with their porno and their being pigs to their women and cheating  and being bad to other people and if they want to do a penance who am I to say no? Maybe next time they will think twice.

OK. I’m getting off track. I was talking about the Holy Fire. I go to this parish once when I am visiting America and it is a round church what looks like a really big ice cream cone that has fallen upside down and been squashed. And they have a priest call Father Elvis or something and you know what they have for the Holy Fire? It’s just a few pieces of sticks in an outdoor barbecue and they get it going with some lighter fluid stuff. You know what I mean? Then the wind comes along and it fizzles out.

What kind of Holy Spirit Holy Fire is that? I’m thinking to myself, “Mantilla, this is just about right for this mambsy pambsy kind of American church what has carpet everywhere. The fire has fizzled out, and it was fake to start with. What they need is a Spanish kind of Semana Santa–and that fat priest who is rolling his eyes can lead the penitents. He can call up my brother Victor and he will send him one of his whips.”

I tell you what hon. I like those really big fires. For me, if I were a holy priest, I would have not just a Holy Fire, but I would get some fireworks in there too without telling anybody. Now that would be a Holy Fire to remember you know what I mean! Maybe then when the altar boys set the whole thing going the fireworks go kerboom and light up the night sky and we have lots of sparks and from then we really think, “Madre de Dios! What if the Holy Spirit explodes into my life like this? What if the Holy Spirit surprises everybody and maybe scares a few people too?”

Then I am thinking, maybe for the Holy Fire we could bring back the good old days when we had really big bonfires and burnt heretics. I tell you…this Holy Week with them all attacking the Holy Father! I can think of one or two, and we could use their newspapers to start the fire with. You know what I mean?

OK. Settle down hon. Have another sip of your sangria. Mantilla is just kidding you know?