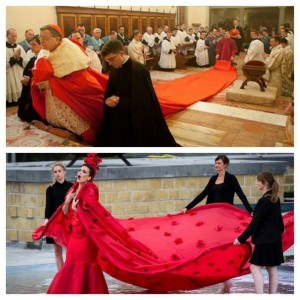 Lemme tell you hon, that Cardinal Burke, he some kind of crazy American bishop.

I just about roll over and thank Jesus, Mary and Joseph when I see him wear the cappa magna.

Everybody say, “Ohh, that Cardinal Burke, why he trying to make everybody mad by wearing that big red cape? Who does he think he is? The pope?”

Then I hear other people say, “If that is what he does when he is Cardinal, what will he do when he becomes Pope? He’s going to bring back the triple tiara and the peacock fans and the big chair they carry him around on.

So at Veritas Vestment we decide on this new fashion show with outfits inspired by church clothes. Listen hon, Mantilla didn’t work hard to get her degree in Ecclesiastical Haberdashery from Salamanca University for nada. I make this decision: with the new pope nobody wants Mantilla’s vestments no more.

They come in with old potato sacks saying, “Mantilla, can you cut these up and make a new vestment for me?”

“Do they want some embroidery?”

“No. Just paste some felt grapes on the outside. That’s good enough.”

Hon. I am loving Pope Francis, but business is not so good since his plain style is back on top.

This picture is one of the new outfits from our fashion show from my new company which is named Via Veritas. You should see what we are doing with lace and brocade. All very classy hon.

So why everybody so upset about Cardinal Burke and the cappa magna? My fiancé Augusto he explain it to me. He a matador hon so he know all about the red cape. He tell me that El Diablo is like El Toro–a big black beast with horns who want to chase you around and trample you and poke holes in you. This is not good. So what is matador? He’s the little warrior who fight El Diablo who is El Toro the bull. The red cape is the Cardinal’s matador cape. It not so hard to understand when Augusto explain it to you. Cardinal Burke wears the cappa magna to say, “The red clothes stand for the blood of the martyrs and the cappa magna is my matador cape. So you don’t like it? You probably one of those softies who think we should get rid of bull fighting too.

Hon, somebody else tell me some gossip about Cardinal Burke. They are saying this demotion is best thing. Soon he is being seen as a martyr. People saying that Cardinal Kasper is behind it all. Hon, did you know the word “Kasper” in German mean “clown”? Maybe he is the one behind these clown masses. Who knows? So anyway, if Cardinal Burke go to Malta and become a martyr, then when Pope Francis is finished they will bring Burke back as the next pope.

Maybe then my business will take off again.