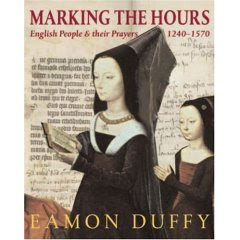 I’ve just finished Eamon Duffy’s latest, Marking the Hours. As usual, a masterful study of late medieval and the years up to and through the English Deformation. Duffy scrupulously gathers the data, cleverly interprets it and draws the right amount of conclusions from it.

Together with Stripping of the Altars and Voices of Morbath, Marking the Hours continues Duffy’s relentlessly thoroughgoingly professional re-assessment of the English Deformation. Always careful in his scholarship and never polemical or extreme, he nevertheless continues to reveal the fact that the Catholic faith at the end of the Middle Ages was alive and well in England. The lay people were involved, were pious and compratively well educated in their faith.

Marking the Hours is Duffy’s study of breviarys from the time. These prayer books–first expensive hand scripted, and later cheap and cheerful copies from the new invention of the printing press, were used, notated and handed down to the next generation. By studying the handwritten margin notes, the alterations and personal prayers Duffy is able to deduce what else is going on in England and also in the ordinary lives of people who owned and used the prayerbooks.

The highlight for me was learning that the breviary used by Thomas More in the Tower is still surviving and can be studied at Yale University Library. There are hand written notes and observations and prayers which were most certainly written by More while a prisoner in the tower. The books features facsimiles of the relevant pages, but a book like this ought to go on tour. I’d travel to see it!

Nuff said. Marking the Hours is a great book. If you are at all interested in England, Church history and the history of the Catholic faith read it.