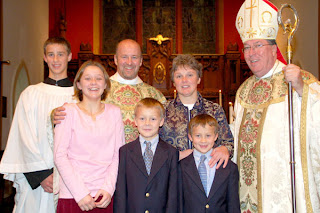 From time to time I am asked to justify or explain the fact that I am a married man with four children, and also a Catholic priest. There are strong feelings in the ‘celibate priests’ debate on both sides, and people expect me to have all the answers. I hate to disillusion those who wish to recruit me for either side of the debate. My own views are a mixture of common sense and loyalty to the traditions and teachings of Mother Church.

First let us dispose of some red herrings. Some favor celibacy of priests for utilitarian reasons. The most common argument one hears for celibacy is that ‘the celibate man has more time for God and for his flock’. A married man cannot really serve the Lord with the total dedication that is required. Well, yes and no. Of course, this is one of the arguments put forward by the apostle Paul in I Corinthians 7.32-33. However, in saying this, common sense also prevails.

Does marriage mean that I do not have time for the parish or my priestly work? No. My wife and children are very supportive. I have a job as a school chaplain (not a parish priest) that is very suitable to the married state. Am I busy? Yes, do I sometimes have to work hours that put pressure on the family? Yes, but then so do many other men in other professions, and their hours and time away are much worse than mine. I think of truck drivers, fire fighters, soldiers and sailors and doctors on call. Many jobs take the man away from home. Many travel for days and weeks at at time. People cope. Furthermore, I’m afraid I can think of a good number of celibate men who are not available at all times for all the people everywhere. For some celibacy leads them to a life of selfishness, self absorbtion and isolation. Celibacy does not automatically produce the Cure d’Ars.

Another red herring: the church cannot (or can) afford married priests. Or course some churches cannot afford married men with families, but many can afford married priests. There are plenty of chaplaincy posts available that provide an adequate salary. Any decent medium sized parish can easily support a married man and his family. Catholics should get over the idea that their priests work for $5,000.00 a year. If a married man were to get the benefits in kind that most parish priests receive (house, insurance, expenses, food allowance, utilities etc) plus a rewarding job for life, many men (from a purely practical view) would jump at the chance. However, the married man and his wife and family must be prepared to live the life of faith filled poverty if need be, and many married men and their wives are prepared to do just that in order to serve the church. The support of the married clergy is simply a practical problem to be solved, and it is just as easily solved as finding a salary for any lay person as we do in our parishes, our schools, our diocesan offices etc.

There is a complication which many who are in favor of married priests do not think of: While it may be possible to support married men with families, if they are living according to church teaching and are young and fertile this might mean many children. It is possible to afford married clergy and they can find the time to be priests too, but what if they have a dozen children? I believe it is still possible, but the larger the family, the more the questions of affordability and division of vocation and time availability become an issue.

A third red herring: Celibacy is mandatory because sex is dirty. This is alien to Catholic teaching. Marriage is sacred and so is the marriage bed. Yes, you can find some witnesses from the early church who teach that the marriage act defiles the priest, but just because it is primitive doesn’t mean it is correct. Support for both married and celibate clergy is found in the primitive tradition. The primitive tradition is considered in the light of the whole teaching of the church on marriage and sexuality.

A fourth red herring: married priests make better pastors because they have a wife and children. They understand the stresses and strains of marriage and parenting and so they understand most people’s situation better. This assumes that the man is a good husband and father. I can assure you from my experience as a Protestant that this is by no means the case. When clergy marriages hit the rocks they hit hard. There are all sorts of difficulties and levels of complexity that most marriages never have to face. Just as there are celibate priests who fail to live up to their vow, there are married clergy who have disastrous marriages and are terrible fathers. Likewise, there are many celibate men who understand marriage and family life perfectly well. Remember, they were brought up in a family. They’re not stupid, and as C.S.Lewis said, “The referee can see the game better than the players.” A wise celibate priest can offer advice and direction to married couples and families.

A fifth red herring: Marriage will solve the priest child abuse problem. This assumes that all celibates are frustrated sexually and are secret perverts while married men are all well adjusted, sexually mature and satisfied men. It doesn’t take an Einstein to figure this one out. Again, common sense prevails. Some celibate men are sexually immature, perverted and twisted. So are some married men. Likewise, many celibate men are confident, content and fulfilled within their vow just as many married men are. Celibacy actually pre-empts a whole range of nightmarish problems for the clergy: divorce and re-marriage, homosexual unions, support of divorced clergy wives and children, mixed marriages etc.

So what is my position and why? Simply this: I support the present discipline of the church. It is a discipline not a dogma. It could be changed tomorrow. It could be changed in any number of ways: the Eastern discipline could be adopted. Married older men could be invited to apply for ordination. Men who were laicized to be married could be invited back into active ministry. I can see practical advantages to both positions, but whatever happens it is not for me to say. Therefore, I support the present discipline of the church.

Finally, what is the real reason for celibacy? All of the utilitarian reasons are red herrings for the reasons I have outlined above. Instead the core argument for celibacy is theological. The celibate (priest or religious) pictures for us the ‘Bride of Christ’. The male priest and male or female religious are bethrothed to Jesus Christ, and thus become icons of what all of us are intended to be in Christ. Each one of us are supposed to put Christ absolutely first in our lives and have no greater love than him. The married, in their turn, remind the celibate what marriage is like, and what their relationship to Christ consists of: daily, nitty gritty, self sacrifice. Then the celibate, reciprocate by reminding the married that their marriage is a sacrament that is a mystery that reflects and incarnates the unity between Christ and his Church.