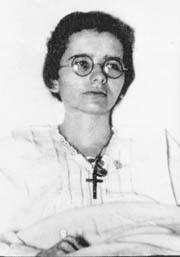 I’ve just finished reading Marthe Robin & the Foyers of Charity by my English friend Martin Blake. I first got to know Martin through my work with the St Barnabas Society, and then through our shared link with Downside Abbey. Martin is lucky to live in Glastonbury–just aroundt he corner from the ruins of Glastonbury Abbey. Martin is a former French teacher and has long been interested in Marthe Robin and the Foyers of Charity. He has written an excellent book–a compelling story written in a clear and intelligent style, and he’s confirmed his status as the English speaking expert on this extraordinary French mystic.

Marthe Robin was born in 1902 and died in 1981. For fifty years of her life she was paralyzed and bedridden. Living in a darkened room in the family farmhouse, she existed during those years in a kind of suspended state. Unable to move from her bed, she did not eat or drink or sleep; receiving only the nourishment of the Eucharistic host once a week. Each Friday she received the stigmata–bleeding from her head, weeping tears of blood and bleeding profusely from the five wounds of Christ. Nevertheless, this victim soul received tens of thousands of visitors, maintained a simple, joyful and pure trust in God’s love and with the help of her confessor and director Fr Finet, began the Foyers of Charity.

The Foyers are community retreat houses. The communities are run by consecrated lay people and led by a priest. They host retreatants for five day silent retreats. This new ecclesial movement in the church was inspired and led by Marthe from her sickbed.

Martin’s excellent book tells Marthe’s story and places her life in the wider life of the Church and the world in the tumultuous twentieth century. For some reason Marthe’s extraordinary life is little known in the English speaking world. Martin’s book should help to remedy this. You can purchase the book here. You can learn more about Marthe Robin here.