May My Heart Always Be Open…

May My Heart Always Be Open… 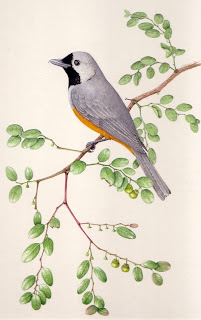 to little birds, who are the secrets of living.”
Is a line by e.e.cummings, and I was reminded of it while chatting with a friend named Mike who is considering a call to the priesthood. He works part time in a store that sells bird seed and bird feeders and stuff to people and Mike said he didn’t really get the whole ‘bird thing.’
I said, “Birds. Birds. See, they’re angels incarnate.” He looked a little bit shocked, “But not literally, or at least, I don’t think so,” I continued, “But it made me think because I used to visit the monastery of Mont St Michel in France which is on an island in the sea and it was full of birds all the time, and I’ve noticed in bad places there are no birds, so maybe.”
And bird watching is definitely a contemplative past time. Then I remembered another story told me by a man who bred parrots. He said caged birds bond with their keepers. They actually like their keepers and sometimes when they move on the bird languishes. I had a parakeet in high school, for instance, that died when I went to college. Awww. Sad.
Anyway, the parrot guy told me that one of his birds was kept by a boy who got cancer. Poor ten year old kid was having chemotherapy and was very sick and his hair all fell out. Guess what happened? The bird stopped eating, got droopy and started to pull all his feathers out. Sympathetic suffering from our feathered friends.
So who knows in the whole vast mystery of the created cosmos, what strange things are going on? It’s there in St Paul of course, when he says “the whole creation groans for redemption.”
Birds and everything.
PatheosDwight2009-06-16T12:15:00-04:00June 16th, 2009|Categories: Patheos|0 Comments