McElroy and Chaput on Chastity

McElroy and Chaput on Chastity 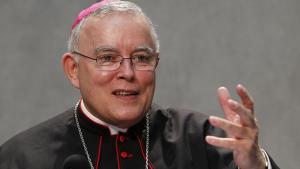 This week we have an American bishop and Archbishop writing articles touching on the question of chastity.

In this article for London’s Catholic Herald Archbishop Chaput comments that faithful Christians are the West’s “new dissidents.” In the midst of writing about the openly anti-Catholic attack on federal judge nominee Amy Coney Barrett by Dianne Feinstein, Archbishop Chaput notes that the battleground is human sexuality.

the episode with Amy Barrett is part of a new and much wider “repressive turn” among Western liberals – a turn not merely moralising in its own perverse way, but quite intentionally inquisitional. The target today is not just the Catholic Church but the whole framework of biblical moral thought and its public influence. And the weapon of choice is the issue of sex.

Archbishop Chaput then goes on to refer to the Nashville Statement–a re-affirmation of historic Christian sexual mores put out by Evangelical Christians. Such a document should have garnered widespread support from American Catholic bishops, but there was a strange silence from them–as if they were keeping their mitres below the parapet. Chaput notes:

On August 29, a group of prominent Evangelical scholars and pastors – including respected public voices like Russell Moore – issued the Nashville Statement, a public text dealing mainly with issues related to sexuality. It’s worth reading in the original, rather than reading about it. Nothing in the document is shocking or belligerent. On the contrary: in its preamble and 14 articles, the text simply reaffirms historic biblical beliefs about marriage, chastity and the nature of human sexuality. Critics might question its timing or structure or wording or things it omitted. Some Evangelicals have done so. In a normal time, though, the statement would be a non-story.

But we don’t live in a normal time. We live in the midst of a culture war. A methodical effort is now playing out in the American mass media to recast biblical truths as a form of “hate”, to reshape public opinion away from those biblical truths, and to silence anyone who stays faithful to Christian teaching on matters of sexual behaviour, sexual identity, family and marriage. The message is simple: conform to the new herd dogmas or enjoy the consequences. Which explains the river of elite contempt that was quickly poured out on the Nashville Statement.

As Archbishop Chaput says, this is not really remarkable. Christians of all stripes have, down the ages, in one way or another, felt obliged to defend Biblical, historical Christian morality.

What is astounding is that just a few weeks later another Catholic bishop–Robert McElroy–of San Diego, wrote this article in America Magazine.  The bishop laments the attacks on Fr James Martin, but sets his criticism within a wider discussion of Christian virtue–including chastity. Bishop McElroy writes,

The second corrosive impulse of the campaign against Building a Bridge flows from a distortion of Catholic moral theology. The goal of the Catholic moral life is to pattern our lives after that of Jesus Christ. We must model our interior and exterior selves on the virtues of faith, love, hope, mercy, compassion, integrity, sacrifice, prayerfulness, humility, prudence and more. One of these virtues is chastity. Chastity is a very important virtue of the Christian moral life. The disciple is obligated to confine genital sexual activity to marriage.

But chastity is not the central virtue in the Christian moral life. Our central call is to love the Lord our God with all our heart and to love our neighbor as ourselves. Many times, our discussions in the life of the church suggest that chastity has a singularly powerful role in determining our moral character or our relationship with God. It does not.

Happily, three days after the statement, Cardinal Robert Sarah approached some of the same issues from a Catholic perspective in the Wall Street Journal. Sarah stressed that “to love someone as Christ loves us means to love that person in the truth.” Sexuality is a gift from God with beauty and purpose. Within marriage, sexual intimacy is a source of unity, joy and new life. At the same time, Scripture is clear about the destructive nature of promiscuity in any form. The call to chastity applies to all persons, in all circumstances, whatever their state of life or sexual inclinations.

Bishop McElroy seems to be saying, “Oh yes, all of that. Yes. Of course, but not really. Chastity? It doesn’t matter that much.”

Bishop McElroy is correct that a whole range of virtues are required of the disciple of Jesus Christ, but does he really not understand that they are all interconnected and that chastity (or the lack of it) affects the spiritual and moral development of the whole person? Doesn’t his statement give the impression that the life of virtue is like being presented with a menu from which one chooses the virtues a la carte?

I may, of course, be misreading the Bishop. It is easy to do in this day when so many Bishops in the church issue statements that are ambiguous and mis leading. If I am misreading the bishop, I am happy to be corrected and clarification would be welcomed.

I do wonder sometimes, do any Catholics read the Bible at all? It would seem from Scripture that chastity does indeed have a “singularly powerful role in determining our moral character and our relationship with God.”

But excuse me for quoting the Bible. I have come to understand that in Catholic circles to do so is often an error in taste, and I realize, of course, that passages like this one and the one in Romans have long ago been explained away by liberal scholars, They smile condescendingly and say, “Yes, but happily we know much more about human sexuality now than in St Paul’s day, and besides anyone can see that the man was sexually repressed, misogynistic and perhaps a closeted homosexual.”

If I have erred in my questions here I hope others who know more will forgive me. I am one of those quaint Christians who actually believes the Bible is the inspired Word of God, and this handicap is worsened of course by the fact that I am, alas, only a convert.