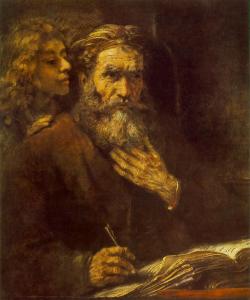 So nobody really likes tax collectors, but did you know why they were so despised in Jesus’ time?

Its because of the way the Romans administered the tax collection system. They hired a local person (who knew who was really wealthy and who was not) and gave the guy a couple of soldiers and told him the amount of tax he had to collect. Whatever he collected above that amount was his to keep as his remuneration…and he could use the soldiers to encourage all those who were somewhat reluctant to contribute to the Emperors’s coffers.

So Matthew was not popular. The fact that he collected from his fellow Jews for the hated Romans made him even more of.a scab.

But Jesus reached out to this sinner.

It brings to mind, therefore the question of wealth. Matthew was rich, but he was poor spiritually. So who is rich and who is poor?

Are you poor because you don’t have a high income? Maybe a person with a low income but no debt is richer than a person with a high income who is over their head in debt. Are you rich because you have a lot of money? What’s a lot? I’ve met a good number of people who seem very rich, but they complain of not having much money. Others seem to be poor but claim that they are richly blessed and have all they need. It’s impossible to judge.

The question is not really how much money you have, but what you do with it. Here are some fictional examples. You decide who’s rich.

1. Mr Jones has worked hard all his life to build a successful business. Now, in his fifties, the business was put on the stock market and he discovers that he is rich. He has millions of dollars. So he sets up a family foundation, and together with his wife he builds churches, funds projects in the developing world, quietly helps widows and orphans and after ten years of philanthropy he and his wife downsize and live in a modest three bedroom rancher so they can do more. His company continues to prosper. He drives a five year old Mercedes. They live a quiet, but comfortable life and devote all their time to their charitable work. Is Mr Jones rich?

2. Mr Smith has worked all his life as a packer in a warehouse. His wife works full time to make ends meet. They scrape by just managing to meet their payments every week. He doesn’t give a dime to anyone and worries constantly about money. Mr Smith plays the lottery every week hoping that he’ll win a million dollars. He complains about the poor people who hang around outside church and when his brother fell on hard times Mr Smith told him to get a second job. Mr Smith sees Mr Jones at church and comments bitterly about Mr Jones’ car…”It’s alright for some. All I can afford is my old Chevy pick up.” Is Mr Smith rich?

3. Mr White is a billionaire…Continue Reading