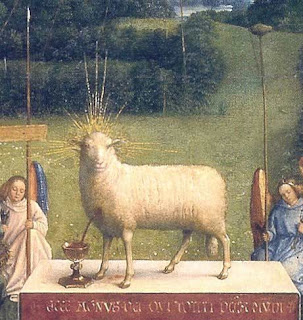 I’ve had a stressful week with some pretty rotten things happening, and I was exhausted and preoccupied coming in to school this morning. Fridays we have our school Mass, and there was a crisis at school too this week and so I was feeling pretty frazzled.

So I was thinking about a homily for St Agnes. How do you relate a first century virgin and martyr to a group of suburban American high school kids in the twenty first century? Then I realized that the temptations and lust, greed and violence endured by twelve year old Agnes in first century Rome is no different than the lust and violence and drunken ness and rage of twenty first century America. Our middle school has plenty of potential Agnes’. Our High School kids are battling the rage, the violence, the greed, the lust and the atheistic hatred of the faith. Everything Roman Agnes faced our children face today. American society is in many ways, just as pagan and decadent and violent and full of despair as ancient Rome.

I was feeling pretty emotional about the problems of our students and their challenges. I tried to preach on Agnes and referenced the movie True Grit–in which a young girl shows great courage in the face of evil, and said that Agnes also had ‘true grit’, that we were all in a battle, and we should look to the children as our models, for they keep the faith. This is after all what a virgin martyr is–a child who has kept faith, kept purity, kept trust, kept beauty, kept love, kept truth–even at the cost of her life.

The homily was over, the prayers were ended and it came time for the offertory procession. Who should be in the offertory process (by God’s great goodness) but one of the sweetest sixth graders in the school. A child named Agnes. When she brought forward the gifts and handed me the water and wine which would become the body and blood of Christ she gave me the most beautiful smile, and my hard heart melted. My spirit lifted and I swear that this twelve year old Agnes in Greenville South Carolina was also first centry Agnes come to smile on me.

How can I express the unity I felt as I went to the altar? A mystical unity with yet another member of the Body of Christ. She was my sister, my daughter, my child. She kept the faith I had lost, and offered it back to me as a gift, and I understood what the church means when she says that a saint is ‘raised to the altar’. Somehow it is all true, more true than I can put into words that through the sacrifice of the Mass we were one today with Agnes; who is one with Christ for Agnes (a twelve year old girl–here in the Agnes I saw today and there in heaven in the Agnes of two thousand years ago) both are radiant reflections–instant icons (in the form and face of a little girl)  not of Agnes, but Agnus…

… so in that child: Ecce Agnus Dei–Behold the Lamb of God.