Movies and the Middle Ages

Movies and the Middle Ages 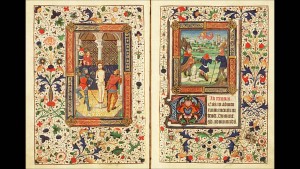 My article for Imaginative Conservative this week discusses the visual age we live in and why it is increasingly like the Middle Ages.

One of the reasons I sometimes wax nostalgic for the Middles Ages is for the religious spectacle. This was an age of the dramatic gesture: St. Francis standing barefoot in the snow or the penitent Henry IV crossing the Alps barefoot while wearing a hair shirt. It is the age of the passion and mystery plays—rumbustious and beautiful actors with painted faces tramping the boards on portable stages with painted backdrops—gurning demons, nagging Noah’s wives, dreadful Judases, and foolish apostles. It is the age of liturgical spectacle with jewel-encrusted chasubles, impossibly ornamented reliquaries, processions, pilgrimages, popes and priests, cardinals and curates all arrayed in their vestments or beggar’s robes as was their station.

It is the age of monumental architecture—soaring fan vaulting, flying buttresses, pillars and cloisters and pilasters and columns. The church interiors were painted bright colors and adorned with statuary and wall paintings; cloth of gold, embroidery, gilt and silver, jeweled chalices, ciboria, paten and plate. It is the age of the rose windows and Sainte Chapelle and the poignant carvings at Chartres or Gislebertus’ humble work at Autun. In an age where books were as precious as diamonds and most of the people could not read, the faith was visceral and visual and vitally alive.

This is not to say that the Christianity was stupid and dumbed-down or irrational, for this is also the age of the greatest Christian theologians and philosophers. This age belongs to the dumb ox Aquinas and Albert the Great. It is the age of Duns Scotus and Bonaventure and Roger Bacon and Anselm of Canterbury. Nevertheless the religion of the people was one of pageantry and pomp and penitence and prayer. It was a vital religion with drama and romance—where the splendor of liturgy and the squalor of life were juxtaposed in an everyday clash of the beautiful and the beastly, the mundane and the marvelous, the glory and the gory, a gasp at the glimpse of heaven in the gaps of time between each mundane moment in the short dance until death.

It may not be easy to see the movies in the Middle Ages, but I believe there are more similarities between that world and our own than we might first admit.