Night of the Hunter

Night of the Hunter 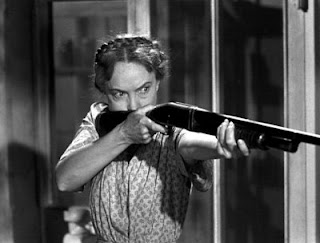 Keep your whining victim feminists and for a strong woman give me Lillian Gish in The Night of the Hunter–which I finally watched for the first time last night. The film really is a masterpiece, not only for the stylish and dramatic black and white expressionistic cinematography, but most of all for the moral heart of the film. Lillian Gish plays a tough, warm hearted West Virginia woman who takes in waifs and strays. She spots Robert Mitchum’s serial killer phoney preacher a mile off and keeps him at bay with a beady eye and a shotgun.

There are so many strongly Christian themes in this classic. Lillian Gish who is tough on the outside and tender on the inside contrasts with the aptly named Icey Spoon–the woman who oozes religious sentiment and falls head over heels for the con man Powell. Her sentimentalism–letting him into their lives–leads to murder and abuse. Her weak husband stands by and allows her to dominate and manipulate the scene, and while she appears to be sweet and religious she speaks her real mind at the church picnic where she is totally selfish and cynical about love. Symbolically she is always making fudge, but she controls who gets the sweet fudge in order to manipulate them.

The contrast between her and Lillian Gish’s character continues when Powell is finally apprehended and is in jail awaiting execution. Icey Spoon leads the lynch mob out for revenge. Her self righteousness and religiosity has turned to violence and we realize that the reason she fell for the phony preacher is because she’s a hypocrite herself, and when she turns to violence she reveals herself to be on the same level as Powell. Rachel Cooper (Lillian Gish’s character) on the other hand, simply gathers up the children and flees from the darkness of the criminal court, the murderer and the lynch mob.

Rachel Cooper is tough and uncompromising. But she is also tender, loving and generous. She is the true Christian, not taking any crap, but recognizing the goodness and strength of the children themselves. Her final words are not about the criminal Powell, but about the children. “They abide. They endure.”

‘Bout right, and unless you become like them you cannot enter the kingdom.