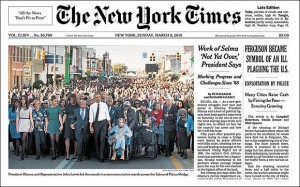 I’ve never come across a more biased, close minded, slanted and propagandistic reporting than in the mainstream American press.

In Britain the major papers have an angle, but you know what they are. The Times is middle of the road. The Telegraph is conservatives. The Guardian is left leaning.

That’s okay because you know what their bias is and they embrace that.

The problem with papers like the New York Times is that they pretend to be objective when in fact they are lapdogs to the liberals.

Check out how they cropped Laura and former president Bush from the Selma march over the weekend. Go here.

The Daily Telegraph in London reports on the story  here.

I’m not great fan of the Bush clan, but I’m just pointing out the shameless bias and shallow idiocy of the American press.

Thank God for the new media who are learning how to report the lies of the mainstream media.