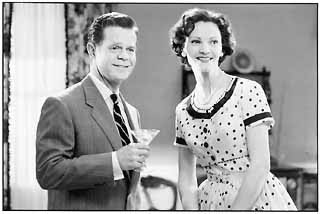 One of the good things about Netflix is that you can get minor movies that are only a few years old to watch again. I don’t think Pleasantville was too hot at the box office, but like Groundhog Day, it is a fascinating fantasy film with strong theological themes.
The plot involves two contemporary teenagers from a broken family who get sucked into a black and white TV show. It’s called Pleasantville and its a 1950’s Andy of Mayberry, Dick Van Dyke Show, Leave it to Beaver world. Every night Dad comes home to pot roast, ice cream and home made cookies. Everybody smiles and is polite all the time. Everybody is a virgin, everybody is nice, everything is neat and tidy and ‘just so.’
But the brother and sister bring sin into this little Americana Eden. The results are interesting to watch. People start seeing things in color. One by one as the characters are enlightened they start to become colorful as well. Chaos and corruption start to creep in. Mom has an affair with the local soda fountain man who has discovered a talent for painting. Violence erupts as the little town’s neat and tidy, black and white world is shattered by color.
The fascinating thing about Pleasantville is that, while it has strong theological themes it isn’t really preachy. It shows that sin brings suffering and corruption and violence, but it also shows that human choice brings beauty, love and real freedom. Through sin the characters of Pleasantville lose their artificial, neat and tidy perfection, but they gain something more. It can’t be said that this is an overtly Christian film, and some Christians will find the sexual content and artistic nudity portrayed as disturbing. However, it is a thoughtful, entertaining study of free will, self righteous repression of freedom, and the effects of the fall.
PatheosDwight2007-01-12T14:31:00-04:00January 12th, 2007|Categories: Patheos|5 Comments