On the Reality and Relevance of Relics

On the Reality and Relevance of Relics 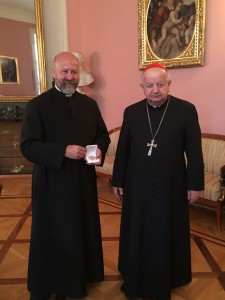 We are heading home after a fantastic parish pilgrimage to Poland where we were uplifted, astounded and inspired by Catholic Poland. 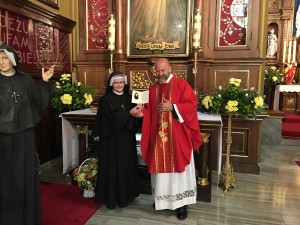 Receiving a relic of St Faustina from Sister Ignacia–custodian of the relics.

Part of the reason for our journey was to receive first class relics of Pope St John Paul II and St Faustina to be housed in the new Shrine of the Divine Mercy in our new church of Our Lady of the Rosary. Yesterday we received the relic of John Paul II from the Cardinal Archbishop of Cracow and the relic of St Faustina from the custodian of the relics at Faustina’s convent in Cracow.

These were scarcely the only relics we venerated however. The week started by visiting Niepokolanov–the friary of St Maximilian Kolbe where we celebrated Mass with a first class relic of the saint on the altar. The whole friary was one huge second class relic of the saint. We walked through his cell, saw his hats, coats, habit, breviary, vestments and books. From there we visited the birthplace of St Faustina at Swinice Warkie. There was the font where she was baptized, the house she grew up in and on the altar her first class relic. Later we were to visit Wadowice–the birthplace and boyhood home of Pope St John Paul, see where he was baptized, see the school he attended and the bakery shop where he feasted on cream cakes. Later we would see a room full of his rosaries, crucifixes, the jacket he wore when hiking, his ski boots and the bloodstained cassock he was wearing when shot.

The little relics we have to take home are therefore simply little fragments of this whole, much greater experience of the reality and the relevance of the saints. When we venerate a little fragment of bone, a scrap of cloth with the saint’s blood or keep a page from their prayer book, their rosary or a scrap from their habit we are connecting with the reality of their lives and their place in history.

A relic, therefore, is much much more than the tiny fragment of bone or the blood stained cloth. It is a reminder of the reality of the faith. The Catholic faith is not just a good idea. It is something that is lived out time and again in the flesh and blood of the saints and martyrs. It is as real as bone and blood. It is a fluid and fresh as hair and flesh. Furthermore, the Catholic faith is not real if is not lived out in this way. It is not just a document. It is not  just a list of rule and regulations. It is not just a theological theory. Pope Benedict XVI said “The lives of the saints are lived theology.” and “The Bible can only be interpreted through the lives of the saints.”

They are more than a mere chip of bone or scrap of bloodstained cloth.

They are a connection to history, and a reminder of the reality and relevance of our religion.