The Agony of Auschwitz

The Agony of Auschwitz 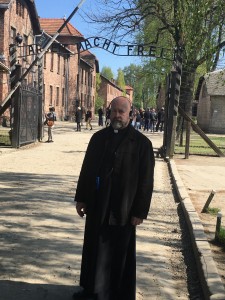 I didn’t get to blog very much during our parish pilgrimage to Poland because we were on the go the whole time and when I wasn’t on the move I was spending time with the pilgrims, hearing confessions, saying Mass, leading prayers or just hanging out.

We’re all trying to sift through our memories to see what God is saying to us and how he is working in our lives. For all of us one of the key highlights of the trip was our visit to the Nazi death camp at Auschwitz.

The day before we had visited St Maximilian Kolbe’s friary at Niepokalanow. I celebrated  Mass at the altar in his little friary chapel and we visited his first cell there and the rooms where he was later arrested by the Nazis before being taken to Auschwitz.

As we visited the death camp one was struck first by the crowds of people walking through the museum and second how solemn and silent all of them were. The displays at Auschwitz are, if anything, understated. In a very matter of fact way they chronicle how the Nazis systematically exterminated half a million people. Every detail of the operation was planned to be as efficient and cost effective as possible. The prisoners were used for slave labor for as long as possible, then eliminated. Their personal belongings were taken, sold or recycled. In fact, when they were being evacuated from their homes the Nazis told them they were to be re-settled in the East and therefore they should take with them their most precious possessions as capital for their re-settlement.  So their suitcases were stuffed not just with a change of clothes, but with the treasures they could carry with them.

The other horrors of the death camps are well documented elsewhere, but the question for me, as for so many was why ordinary people could indulge in such atrocities. Did they have not wives, children, parents, grandparents, brothers and sisters of their own? Had they no heart?

Ideologies are ruthless, and eventually every ideology will end in violence of some kind. It may not be the violence of death camps and genocide. It might be the violence first of depriving people of their rights, bullying them into submission and forcing them to be silent. At first it is financial and social persecution of those who do not buy into the ideology. Then comes the physical persecution, the imprisonment, then the torture and death. This is because an ideology not only demands total allegiance, but it cannot bear criticism, mockery and subversion.

Therefore wherever you see any kind of ideology–religious or secular–beware.

Finally, a society is never so vulnerable to ideologies as when the members of the society are locked into the downward spiral of sin and decadence. Sin makes you stupid. It blinds your eyes. When moral depravity, political corruption, fraud, malfeasance, abuse of the poor and moral relativism reign in a society (as it did in the German of the 1920s) watch out. The society is ripe first for ideology and then tyranny. This is because the people have already abdicated responsibility. They have already given in to their weaknesses, and having given in to their weaknesses they have no resistance. All that is needed is for one threat or one big problem that destroys their comfortable existence, and the leader of the ideology will step up and offer to take care of them and solve their problems.

And they will vote for him or her willingly. They will willingly yield their freedom and dignity in exchange for the security and peace he offers.

And when they do, eventually, the trains to Auschwitz will begin rolling again.