Mother Mary and Calvinist Me

Mother Mary and Calvinist Me 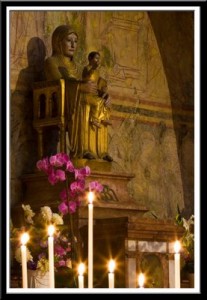 On this busy Solemnity there has been no chance to share my thoughts about the personal effect the dogma of the Immaculate Conception has had on me.

Coming from an Evangelical background with a strong Calvinist slant, I was taught the doctrines of Total Depravity and Eternal Security.

The subtleties of these beliefs, their nuances, conditions and qualifying statements may be mastered by theologians, but to a child the doctrines are on the one hand wonderful and destructive.

Eternal Security seems wonderful because if you are saved you are going to heaven and you know it. You are one of the elect and nothing you can do can either win you the reward of heaven or damn you to hell.

“Do you know if you died to tonight that you would go to be with the Lord?” is the question they ask, and if you are saved the answer is “Yes!”

That all seems fine and dandy, but my soul was left in a quandary. “What then shall I do?” I thought as a young man. “If I am saved and going to heaven. What shall I do here below?” I wasn’t sure what the answer might be.

But then this glorious knowledge that I was saved and going to heaven no matter what was thrown rather off kilter by the doctrine of total depravity. There was clearly nothing good in me. I was totally depraved. I was “dead in trespasses and sins” said the preacher and “all my righteousness was as filthy rags.” So, on the one hand I was one of the elect and going to heaven. On the other hand I was totally depraved.

Yes, yes, I know. I was supposed to rely totally on the grace of God through faith alone so that this filthy wretched sinner might get saved and go straight to heaven. I understood the logic…;the relentless logic…but it didn’t feel right. It didn’t feel true.

Then as I became a Catholic I began to understand how God works in the human soul and it was through an increasingly deep understanding of the work of grace in the life of the Blessed Virgin that I began to see what was being done and could be done. First I began to see that I was not totally depraved. This is a heresy–partially true and most horrible false at the same time.

Instead, God looks on me as he looks on all his children with pity and not with blame. He looks down on us as he looked on his first days of creation and booms out, “That’s Good!”

He does not growl under his breath, “That’s Bad!”

The Immaculate Conception of the Blessed Virgin proved (if you like) the doctrine that it is all by grace. God did all. Mary simply and fully said “Yes.” She was made fully perfect and complete through the redemption of her son, and if that happened to her, then it could happen to me. Indeed, the church taught that this was my ultimate destiny. David Mills (a fellow former Evangelical) writes here on the beauty and truth of the dogma.

As she was made perfect in an instant by God’s grace, so by God’s grace and completely by God’s grace I might go where she was. Then I began to see why they say she was the “fount of all graces” and that her intercession would win for me what was given to her.

It is hard to explain how it all connected for it connected in my heart more than in my head. It is something I cam to know and realize was a possibility. That somehow through her help and through the miracle God wrought in her a new dimension of humanity was possible.

She showed what could be done and should be done, and this corrected that other Calvinist misconception–Eternal Security.

Eternal Hope of course, but there was still work to be done. There was a will to conform to God’s will. There was not one “yes” to be said, but many, many “Yes”es. There were also many “nos” to be said. No to myself. No to sin. No to temptation. No to laziness. No to vanity and pride.

So on this feast of the Immaculata I pray that the simple fullness of perfection and wholeness known by her may one day somehow or other in  this world–but more likely in the next–be brought to fulfillment through grace and my co operation with grace.

May I ride that grace as a surfer rides the wave–with beauty, skill and athletic finesse.

And as I try to do so may  this woman full of grace pray for me now and in the hour of my death.