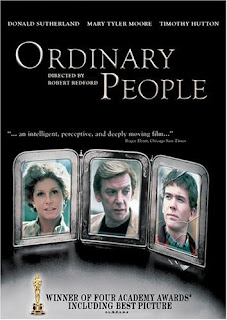 I’ve just watched again Robert Redford’s classic Oscar winning drama Ordinary People with Donald Sutherland, Mary Tyler Moore and Timothy Hutton. This is one of my favorite films. The study of the family dynamic in the midst of grief is stunning and heart wrenching. It reminds me of the book People of the Lie by M.Scott Peck.

Both Peck’s book and the film portray the sort of evil that can exist within a family when one or more family members maintain a facade of perfection and unconsciously project all the evil onto another family member who is scapegoated. In the film the mother cannot bear anything to go amiss in her perfect suburban family. When her golden boy dies tragically the younger son assumes all the blame. The father’s sensitive suffering, the boy’s breakdown and the mother’s cold resilience in the face of it is chilling.

This is one of those  films which does not have a morsel of explicit religion in it, but is woven through with deep lessons in human love and forgiveness that point ultimately to the love and forgiveness at the heart of the gospel. Despite no overt religion, a spiritual theme is woven through as the high school chorus sings Alleluias, and Hutton in his happy moments sings Alleluias as he euphorically runs along.  It may not be intended, but I also couldn’t help reading into the film an extended meditation on the parable of the prodigal son with (in this case) the Mary Tyler Moore character playing the part of the self righteous elder son.

If you’ve never watched Ordinary People give it a try. The acting is excellent. Mary Tyler Moore is riveting, Hutton turns in an amazingly powerful performance for such a young actor and Sutherland supports the conflict between them alternating between weakness and strength.  Redford directs with a sure and understated eloquence to produce a piece of deep and powerful domestic drama which I think deserves to be a classic. The themes of enduring love and forgiveness–and the terrifying results when forgiveness and love are rejected echo in the heart and mind for a long time.