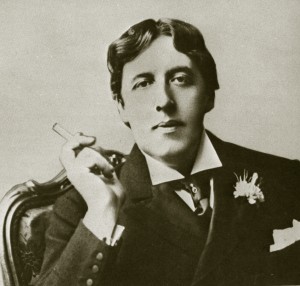 Gay icon and martyr figure Oscar Wilde converted to the Catholic faith on his deathbed. You can read the fascinating story here.

In 1900, Wilde developed cerebral meningitis and became very sick. When it became clear he might die, his friend and apparent homosexual lover Robbie Ross who was with him called for a Catholic priest. When the priest arrived, Wilde requested to be received into the Catholic Church. The priest later recounted how it happened:

As the voiture [carriage] rolled through the dark streets that wintry night, the sad story of Oscar Wilde was in part repeated to me…

Robert Ross knelt by the bedside, assisting me as best he could while I administered conditional baptism, and afterwards answering the responses while I gave Extreme Unction to the prostrate man and recited the prayers for the dying.